Volunteers from around the world have united to help conservation projects in and around the Peak District National Park. 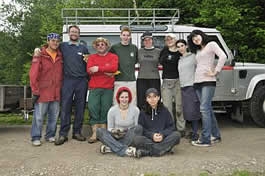 An international group of young people swapped their backpacks for tool-bags and got down to serious manual work - helping construct a footpath at Tittesworth Reservoir, steps in Macclesfield Forest and fences on The Roaches.

Choi Junho, from South Korea, said: “It’s really nice to work in the countryside with people from all over the world. I’m very happy that we can help the rangers look after the national park. There are not very many opportunities to do this at home, but now that I have had this experience I am looking forward to finding similar projects in my own country.”

David Cramp, the national park’s conservation volunteers organiser, said: “We welcome the Concordia groups who come each year. They put in an awful lot of hard work while they’re here, helping combat erosion, improve the infra-structure of the national park and protect wildlife habitats. And they leave with new skills, knowledge and experience that has a positive and far-reaching impact on their lives.”

Another international Concordia group will arrive in August.

Anyone can join the national park conservation volunteers, either individually or in groups - go to www.peakdistrict.gov.uk/ppcv for more information, or call 01433 631433 and ask for David Cramp.