Peregrine falcons have bred successfully for the first time in 100 years on one of the country’s most popular climbing crags - thanks to a remarkable co-operation between protection organisations, local people and visitors. 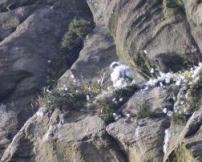 Two chicks have taken their first flights from the Roaches, a spectacular gritstone edge near Leek in Staffordshire, owned by the Peak District National Park Authority.

Nesting attempts had failed in the previous two years, possibly due to disturbance. So to give the birds maximum chance of success, the National Park Authority, Natural England and the RSPB negotiated access-restrictions from early April, as soon as they realised the parents had selected this high ledge on an internationally-renowned section for climbers.

They put up signs in agreement with the British Mountaineering Council and other user groups, asking people to avoid the site and behave considerately. Shifts of rangers, estate staff and numerous volunteers kept watch from early morning to late at night, helping hundreds of visitors to enjoy the birds without causing disturbance.

Peregrine falcons are the fastest animals in the world, swooping to catch prey on the wing at speeds approaching 200km per hour. Highly protected under the Wildlife and Countryside Act, peregrines started breeding again in the Peak District in 1981. There are now believed to be around 25 pairs in the Peak District National Park, 1,400 pairs nationally, but the species is still considered comparatively rare.

National Park chief executive Jim Dixon said: “We should all be honoured that peregrine falcons have returned to the Roaches on ‘our watch.’ We’ve had tremendous support from regular users. Though it hasn’t always been easy, they’ve observed our requests, warned newcomers about the site and many have kept watch with us. They include the British Mountaineering Council, fell-runners, walkers, birdwatchers, and local schools. We want to thank them all, as well as our partners - Natural England, the RSPB, the farm tenant and neighbours.”

British Mountaineering Council spokesman Henry Folkard said: “The climbers are very pleased the young have been successfully reared. From the climbing point of view it’s hardly possible to conceive a more inconvenient place for the birds to nest. The restrictions covered a significant proportion of some of the most high quality climbing routes, which normally get very busy, so a very special word of thanks is due to all those who forewent their own enjoyment to help bring about this happy outcome.”

National Park natural environment manager Rhodri Thomas said: “We are tremendously proud that these magnificent birds have returned to the Roaches - for the first time, we believe, in a century.

“It’s probably due to a general population-increase since the 1960s with a reduction in persecution and pesticides, coupled with the measures put in place to prevent disturbance. With luck, they’ll be back next year, though we hope they choose a nest-site that’s a little less popular.”