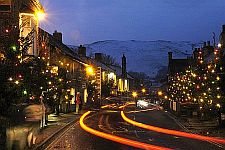 Santa is beside himself, he needs to find his missing elf - lost in pretty Castleton, at the Christmas Lights switch-on. “Children,” he says, “help me seek - where’s my elf gone in the Peak?” They go look for clues galore, given out in shop and store. Santa’s elf just tantalises - those who find him could win prizes.

The award-winning Castleton Visitor Centre is launching its Santa’s Missing Elf competition at the village’s Christmas Lights switch-on this Saturday (Nov 15) to add a little extra magic for visitors all the way up to December 21.

And by picking up a Missing Elf Passport at the visitor centre, Christmas shoppers can get a stamp and a clue at every participating shop they visit. Five stamps earns them a guess at the whereabouts of Santa’s elusive helper.

A prize draw will be held on December 21 for family treats in the Peak District National Park such as a day’s free cycle hire, a day out with a national park ranger, a tour of the Howden Dam museum, and a walk through old railway tunnels normally closed to the public.

Visitor centre manager Jenny Hanshaw said: “We wanted to support village trade and add extra enjoyment for visitors. Castleton has such a great atmosphere for Christmas shopping, with intriguing gift and craft shops where people can find unusual presents - and now they can track down Santa’s elf.”

In addition, the visitor centre is holding a Christmas Activity Week from December 1 - 7, with craft-making and games for children, along with warm mince pies. Castleton Historical Society’s Peter Harrison - whose family ran Treak Cliff Cavern for generations - will put the spotlight on Castleton’s past with short talks on December 2 and 4 at 2pm.

And the more energetic can go on a four-mile ranger guided walk called “Step Back In Time” on Sunday December 7 (bookings essential on 01433 670216).

Castleton Visitor Centre is open daily from 10am-5pm, and joins late-night opening throughout the village on Fridays, Saturdays and Sundays in December up to the 21st. The village lights will be on daily from around 4.30pm to 11pm until January 3.