A win-win approach to climate change? 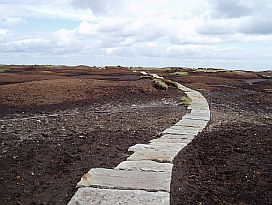 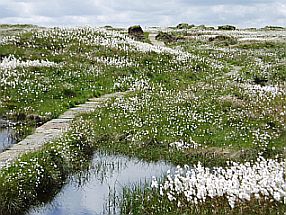 Peat moorlands cover less than 3 per cent of the land surface of the Earth yet they contain twice as much carbon as the world’s forests.

Peat is the single biggest store of carbon in the UK, storing the equivalent of 20 years of all UK CO2 emissions and keeping it out of the atmosphere.

If we keep our peat moorlands healthy they can help us to combat climate change and its effects.

The United Nations Climate Change Conference in Copenhagen heard that it will be difficult to meet emissions targets that will keep global mean temperature rise below the critical 2 degrees of pre-industrial revolution temperatures.

A broad approach is needed to tackle climate change, locking up and removing carbon from the atmosphere as well as reducing emissions.

The moorlands of the Peak District National Park were surrounded by the polluting industries of Lancashire, Yorkshire and Staffordshire. Soot and poisonous gasses settled on the moorland, destroying the vegetation and damaging the peat. Workers walking in the ‘fresh’ air of the moors on their days off returned black with industrial waste.

What Moors for the Future is doing to help mitigate the effects of climate change:

The Moors for the Future Partnership is working within the Peak District National Park and beyond to restore large areas of peat moorland to a healthy, living and sustainable state so that it can once again fulfil its key role in mitigating climate change.

Recently awarded 7 million Euros (£5.5m) from the European Life+ Fund for its ‘MoorLife’ project to restore more than 2,000 acres of Peak District and South Pennine moorland. This was the largest sum to be awarded to a UK project in the history of the EU Life Programme and Moors for the Future is now one of the biggest peat restoration operations in Europe.

Lord Chris Smith, Chair of the Environment Agency, said: “Peatlands are very important, as they store millions of tons of carbon, helping to mitigate climate change and can hold back rain water to prevent flooding downstream.  If these moors are damaged these important services to society are lost.  This is why the Agency is committed to this Partnership Project, it is a win-win protecting biodiversity and helping us manage two of the most serious challenges we face on coping with flood risk and climate change.”

Chris Dean, Moors for the Future Programme Manager, said: “There is an enormous human benefit in having a moorland environment in as good a condition as we can make it. Some 70 per cent of England’s population collects its drinking water from moorland environments, the way they are managed can reduce flooding downstream and peatlands are the UK’s biggest store of carbon.