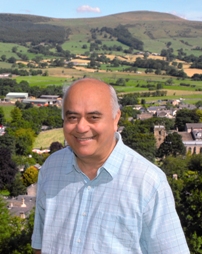 He received the Commander of the Order of the British Empire (CBE) for services to rural and urban planning and the Peak District National Park.

Narendra, 69, has been chair of the authority for two years and is also deputy chair of the English National Park Authorities’ Association (ENPAA).

He said: “I am very excited and delighted but feel very humbled at receiving this national recognition. I am most grateful to everyone I have worked with in the past 45 years for their support. I consider this award as a great national honour which I will cherish for the rest of my life.”

Narendra joined the authority as a secretary of state member in April 2001, after retiring the previous year from his role as head of planning, highways and transport at Sheffield City Council.

During his 35-year career with the council he oversaw more than £1.5 billion of investment projects in the east end of the city, including Meadowhall, and championed the regeneration of the city centre creating the Heart of the City project.

At the Peak District National Park Authority Narendra has played a leading role in:

Jim Dixon, chief executive of the Peak District National Park Authority, said: “Narendra is a passionate supporter of the environment and one of the most respected figures in the national parks movement. Everyone at the authority is delighted that he has received this recognition.

“Anyone who meets Narendra is immediately impressed by the contribution he makes to any discussion. He is equally at home persuading Government ministers to enable more affordable housing to be built in national parks as he is talking to a group of residents on one of his regular community visits.

“Drawing on his wealth of planning and local government experience Narendra has played a leading role at a local, regional and national level on issues like affordable housing, building design and community engagement.”

In addition to his work with the Peak District National Park Authority Narendra is also currently: