The events were organised by the Peak District National Park Authority as part of the wider celebration of the 60th anniversary of the National Parks and Access to the Countryside Act - the legislation that created National Parks, Areas of Outstanding Natural Beauty, National Nature Reserves and National Trails.

Although many of the 17 events during the week - which ran from 27 July to 2 August - were badly affected by rain participants didn’t let the weather dampen their spirits and took the opportunity to get out into the countryside to experience what a national park has to offer.

One of the events during the week was the Tree of Life family fun day at the visitor centre in the Moorland Centre building at Edale. The 23 young people taking part identified trees in the grounds of the Moorland Centre, created a tree collage and took part in environmental games. 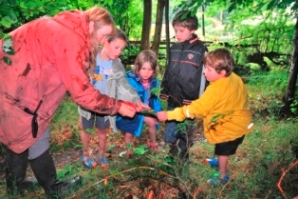 Further information about the 60th anniversary can be found at www.diamondsinthelandscape.org.uk or at www.peakdistrict.gov.uk/anniversary