Pupils from an inner city Sheffield school blossomed in the great outdoors to achieve prestigious awards from the John Muir Trust. 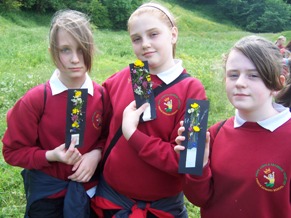 To gain the awards, pupils aged 10 and 11 from Prince Edward Primary School in City Road, explored the landscape and wildlife of Bradford Dale in the Peak District National Park.

Guided by Peak District National Park Authority rangers, the children discovered the secrets of the limestone dale near Youlgrave by investigating its wildlife and plants and learning to appreciate the tranquil riverside.

Ranger Lynn Burrow said: “It was a pleasure to introduce such enthusiastic youngsters to the countryside. They helped water conservation by conducting river dipping exercises to monitor pollution, and they prepared Powerpoint presentations to share their discoveries with fellow pupils and families. The pupils can be really proud of their achievement.”

John Muir Trust awards, which are open to all ages and abilities, involve the four stages of discovering, exploring, conserving and sharing a special place. They are named after John Muir - a Scot who emigrated to California in the 1860s and became a founder of the modern conservation movement, campaigning for the protection of special wild places, many of which are now national parks.

For more details on the John Muir Trust: www.jmt.org