Clearer information is to be provided to users of a narrow Peak District byway to improve the route for all users.

Signs will be put up on the route explaining who is allowed to use Tideswell Lane and encouraging respect between the different types of users, such as walkers, cyclists, horse riders, 4x4s and trail bikes. 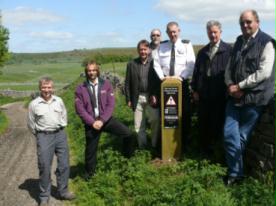 The initiative is part of the Peak District National Park Authority’s Code of Respect, which has the support of all the partners as well as organisations representing motor vehicle users including:

Mike Rhodes, access and rights of way manager for the authority, said: “The use of sensitive routes like Tideswell Lane by different types of user can create tensions.

“By bringing together all the users of the byway we have been able to get common agreement about the best way of protecting and maintaining the route while respecting the rights of all users.”

The Peak District and Derbyshire Vehicle User Group, which represents a variety of trail bike and 4x4 groups, has been involved in new initiative.

Representative Richard Entwistle said: “As a result of legislation over the past 10 years many routes are now denied to 4x4 and trail bike users. This has led to the volume of traffic increasing significantly on the remaining byways and unclassified roads.

“These signs will make everyone aware this is a “multi-user” route and tell motorists of the characteristics of the route.”

John Fox, chair of Eyam Parish Council, said: “Residents and visitors are drawn to the Peak District National Park to enjoy the beauty and tranquillity of the area.

“By advising vehicles to keep to small groups and drive with caution, it is hoped that further erosion of the route will be avoided and all users will be able to enjoy the countryside in safety.”

The advisory signs will be backed up by the police, Peak District National Park Authority rangers and representatives of motor vehicle user groups visiting the area as part of the on-going Operation Blackbrook,

The operation involves stopping illegal off-roading and educating legitimate users about the best ways to minimise the impact of their activities.

PC Kevin Lowe, who leads Operation Blackbrook, said: “We are taking the strongest possible action against illegal off-roading and will continue to do so.

“The signs project is an excellent way forward, and similarly the TrailWise Initiative, a website where vehicle users may go to find information on possible routes, is another step in ensuring vehicle users stay on the right track and the general public are better informed.”