House of Lords says ‘no’ to appeal on Backdale quarry 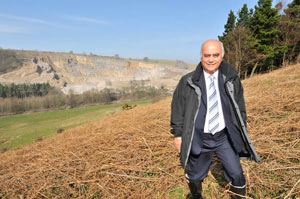 The Peak District National Park Authority is delighted that the House of Lords has refused to hear an appeal against its enforcement action at Backdale quarry on Longstone Edge.

This is likely to be the end of long-running legal action over excessive limestone extraction at the quarry, which damages the landscape of the national park and in the Authority’s view contravenes planning permission.

In March this year, the Court of Appeal restored the decision of a Planning Inspector to uphold the Authority’s enforcement action, but the landowner, Bleaklow Industries Ltd, then requested permission to appeal to the House of Lords.

Now (June 24 2009)  three law lords have turned down the request, stating: “Permission is refused because the petition does not raise an arguable point of law of general public importance which ought to be considered by the House at this time, bearing in mind that the cause has already been the subject of judicial decision and reviewed on appeal.”

Chair of the Authority Narendra Bajaria said: “We very much welcome this decision - and we hope and expect it will speed progress toward a permanent resolution of the problems on Longstone Edge.

“It is a testament to the resolve and expertise of the Authority and its legal advisers. We’d like to thank all those people in the local communities, national environmental groups, MPs and the Government for their active backing of our case.

“We now want to talk directly to the companies involved to find out their intentions. Our expectation is that any future working will be in line with the interpretation of the planning permission given by the Court of Appeal. This is the definitive interpretation which the House of Lords has now said should not be challenged.”

A Planning Inspector upheld the Authority’s enforcement notice after an eight-day public inquiry in 2007, but this was overturned by the High Court in 2008.  The Court of Appeal restored the Planning Inspector’s decision in March this year as well as clarifying the planning permission.

The landowner and operator, MMC Midlands Ltd, may still work under the 1952 planning permission, which is primarily for the extraction of fluorspar in veins within the limestone. Only limited amounts of limestone can be taken off site. Fluorspar is used in chemical products including fluoride toothpaste.

The Authority is continuing to closely monitor activities at the site.