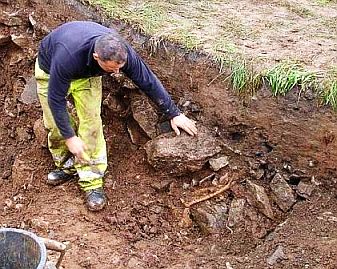 A prehistoric skeleton was one of the finds during a three-week archaeological excavation at the site of an ancient hillfort near Monsal Dale.

Supported by the Peak District National Park Authority, Longstone Local History Group received a £49,000 Heritage Lottery Grant to investigate the site, thought to date from the Iron Age (700BC – 60AD).

Their main focus was to find out how and when the ramparts were built. But they were surprised to find parts of a crushed skeleton in a rock-cut ditch. Only the thigh-bones and pelvis were intact, with the skull and ribcage in fragments.

The adult body appeared to have been thrown into the ditch with rocks from the ramparts pushed on top of it, possibly as a result of hostilities at the site. Work will go on over the next few months to establish its age, sex and possible region of origin.

Nearly 80 people from the local community and 160 schoolchildren helped members of the Longstone Local History Group (LLHG) to excavate the site, under the direction of a professional team from Archaeological Research Services Ltd, based in Bakewell.

Another surprising discovery was fragments of weapons and tools thought to date as far back as Mesolithic times (8000-4000BC), made from chert (a stone embedded in local limestone) and flint (not local at all). More than 100 pieces of prehistoric pot were also found in the lower layers of topsoil – possibly from Iron Age jars and bowls.

Archaeologist Dr Clive Waddington, who led the team, said “The excavation has been tremendously rewarding because it has supplied significant new information for understanding hillforts in the Peak District, a type of monument which has remained poorly understood in the region. The finding of organic remains will allow us to final put in place a chronology for one of the Peak District’s impressive hillfort sites.”

Ann Hall, LLHG project manager, was particularly pleased that so many locals had given their time and energy to help remove more than 2metres depth of soil and rubble. She said “We all feel very privileged to have been given permission to investigate below the surface of this scheduled ancient monument; even for just a short time.

“The site is on private land with no public access and now we have restored the land, there is nothing left on site to show all the amazing features which have been discovered.  The skeleton has been carefully removed along with all the finds. These will be analysed by specialists to give us much more information about what happened in the past.”

English Heritage inspector of ancient monuments for Derbyshire, Jon Humble, said, “This project shows, quite literally in spades, what can be achieved when professional archaeologists, community and school groups work together on an archaeological mystery - and there are many more mysteries out there in the Peak District that have yet to be solved. The Heritage Lottery Fund should be congratulated for their vision in financially supporting this hugely worthwhile project.”

The Peak District National Park Authority gave practical support and advice. Its senior conservation archaeologist Sarah Whiteley said: “We’ve been really pleased to work with the Longstone Local History Group, Archaeological Research Services and the landowner. The project has given so many people a unique experience, helping them develop their understanding of the locality and their archaeological skills. The excavations cast new light on our understanding of the site, it’s been a tremendous achievement and we’d like to thank everyone involved.”

Results of the post-excavation analysis will be presented at the annual Derbyshire Archaeology Day at the Pomegranate Theatre in Chesterfield on 16th January 2010.