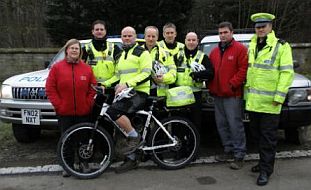 The day-long initiative on Saturday (Jan 10), part of Operation Blackbrook, involved giving out leaflets and talking to recreational drivers and motorcyclists at popular meeting points and refreshment areas. The aim was to make them more aware of lawful and unlawful routes and responsible behaviour towards residents and other users of the national park.

Operation Blackbrook co-ordinator PC Kevin Lowe said: “This was the second event of its kind, and was a great success. We were able to talk to the drivers and bikers in a friendly way and give them the information they need to act responsibly.

“At the same time it enables local people to know that we take this matter seriously and are working together to tackle issues that 4x4 or trail bike use might cause for them.”

Jenny Waller, national park Field Services north area team manager, said: “In the main most users were really supportive of the initiative and the majority were using the correct routes in a sensitive way, being respectful of other users. Many were members of organised clubs which give members researched routes they can enjoy, while ensuring they are all legal.”

One 4x4 driver was cautioned for a road tax offence.

Motorists and residents can get full information on the Peak District National Park Authority website - at www.peakdistrict.gov.uk/vehicles It includes maps of areas drivers and riders should avoid, details of how to report problems and case studies of areas where problems have been successfully managed.

•only use lawful unsurfaced routes and byways

•use peer pressure to stop unlawful or inconsiderate behaviour by a minority.