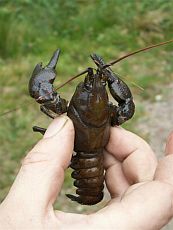 Conservationists have created a new home for more than 100 globally-threatened white-clawed crayfish in ponds in disused limestone quarries.

The UK’s only native crayfish has been virtually wiped out in the Peak District rivers Dove and Manifold by crayfish plague, carried by the non-native signal crayfish - a larger, more aggressive species.

This is the first phase of a project spanning sites in Derbyshire and the Peak District.

The work was helped by volunteers from the National Trust and the Peak District and Lowland Derbyshire BAP groups, who shifted 16 tons of limestone rocks into the pools to construct “reefs” where the crayfish can hide.

The conservationists then caught 101 white-clawed crayfish using small hand nets on the National Trust’s nearby Calke Park estate and transferred them to the pools using special tanks. Now the creatures can breed in isolation, away from streams and rivers where the signal crayfish, and plague, can spread.

Local BAP co-ordinator Karen Shelley-Jones of the Peak District National Park Authority, said: “The National Trust has been a real champion for our native crayfish, creating new wetland habitats at Calke with a Biffaward grant, and now supporting additional crayfish work for this joint scheme.”

The whole £35,600 project was made possible when Karen successfully applied for a £23,200 grant from Natural England through Defra’s Aggregates Levy Sustainability Fund. The rest of the support came from partners in the Local Biodiversity Action Plan (BAP).

Ecological consultancy firm ECUS was commissioned to assess disused and restored quarries for potential ‘ark’ sites, and to seek donor populations; and Natural England and the Environment Agency gave invaluable support including granting the necessary licences and consents.

The need was all the more apparent when ecologists from the Derbyshire and Staffordshire Wildlife Trusts surveyed tributaries of the River Manifold this summer and found no remaining white-clawed crayfish.

Karen said: “It was incredibly rewarding to see this first element of the project come to fruition, and I look forward to rolling it out to former aggregates sites in the Peak District in the second year.

“It’s a brilliant demonstration of different organisations working together across boundaries for a common aim, to ensure one of our most threatened species has a better chance of survival.”