Up to 500 trees are to be planted in the Peak District to mark the 60th anniversary of the legislation that created national parks.

The announcement follows a public vote for one of seven projects to create a lasting reminder of the anniversary for future generations. 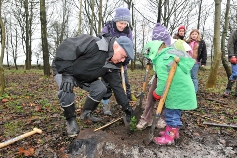 The suggestion to plant 500 trees received 43.4 per cent of the 417 public votes. The full results can be seen at www.peakdistrict.gov.uk/legacyproject

The trees will be planted in the Peak District National Park before summer 2010. The exact locations will depend on negotiations with landowners and ideas from parish councils and communities.

News of the winning project was announced at a reception to mark the end of a day of activities to celebrate the 60th anniversary.

Author Berlie Doherty told pupils: “Be inspired by the place you live in - I certainly am. I regularly use the Peak District in my novels. The villages and surrounding landscapes offer great setting for stories and poems.”

Pupil Niamh Atkin, eight, said: “I like planting trees - it’s lovely for wildlife. Squirrels and owls can find shelter in them.”

The group planted four apple, two pear and plum and damson trees to create what will be called the Bakewell Community Anniversary Orchard. 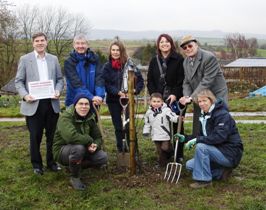 The day ended with a reception for individuals and organisations that have played a big part in the history of the Peak District National Park.

Authority chair Narendra Bajaria said: “National parks inspire many people. They inspire the people who live here; the farmers who help protect the landscape, the staff and volunteers of the many environmental organisations that care for the countryside and the millions of visitors who come each year.

“We have come a long way in 60 years but the really big challenges will be in the next 40 years as we deal with issues like climate change. By harnessing the enthusiasm of everyone we can ensure the national park is an asset for both current and future generations.”