Villagers successful in bid to save Calver Weir

Villagers successful in bid to save Calver Weir 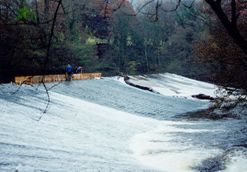 The Peak District National Park Authority congratulated the Calver Weir Restoration Project (CWRP) on receiving the final go-ahead for a Heritage Lottery Fund (HLF) grant of £1.244m towards the restoration of Calver Weir.

This means the Grade 2 listed 19th century building will be saved, along with its associated unique cultural heritage features, important ecological and biodiversity action plan habitats.

The total cost of the restoration project on the River Derwent, in the Peak District National Park, is £1.841m including the erection of a fish pass.  The remaining funding has been provided by £428,000 donations and grants from local businesses, residents and public bodies and £169,000 pledges received for volunteer labour and non-cash contributions.

In addition to the HLF grant, CWRP has received strong backing and support from the Peak District National Park Authority, Environment Agency and English Heritage.

Calver Weir played a pivitol role during the Industrial Revolution by holding back water to power the cotton factory at Calver Mill. Today the structure maintains those higher water levels, which over time has created wet woodland and marshes, which are home to scarce species such as water voles, harvest mice, wild orchids, yellow loosestrife, wood clubrush and a wide variety of breeding birds and fish.

CWRP will now exercise its option to purchase Calver Weir for a nominal sum from its existing owners. Engineering work to restore the Weir is anticipated to begin during October 2009 and continue through 2010 with the completion date dependant on water levels and access. During this time footpaths and entry points, which are part of the River Derwent Heritage Way, will be enhanced, suitable benches installed, bird and bat boxes erected and interpretation panels will provide an abundance of information about the area as well as directions for walkers and visitors.

In an effort to provide funding for on-going maintenance, CWRP is evaluating generating hydro-electric power.

CWRP’s chairman Mike Hennessy said: “The group is absolutely delighted that funding has been secured largely underpinned by the HLF. It’s a testament to a dedicated group of people who have worked tirelessly over the last few years in an effort to save Calver Weir from collapsing and being lost to future generations.”

Peak District National Park cultural heritage manager Ken Smith said: “The restoration of Calver Weir has become increasingly urgent as a number of breaches threatened its stability. We have worked with the community on this project for years, and we’d like to congratulate them for their hard work and the Heritage Lottery Fund, Environment Agency and English Heritage for their vision. It shows what can be done when public bodies work together with communities for a common aim. It means a unique part of the national park’s heritage will be saved to become an asset for present and future generations.”