Can humble moss save the Peak District moors

Critical Moss: Can humble moss save the Peak District moors? 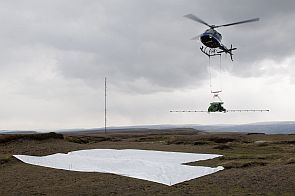 A rare moss that was in danger of disappearing from the Peak District has been distributed across the moors from a helicopter as part of a pioneering project being delivered by Moors for the Future on behalf of The Co-operative and Natural England.

Using a revolutionary new technique, scientists have been able to propagate Sphagnum moss in a laboratory before the tiny plant that was ravaged by pollution from the industries of northern England was dropped by helicopter onto the remote windswept moors.

Sphagnum moss is the basic building block of our blanket peatlands- the Critical Moss.   As it partially decomposes in waterlogged conditions it forms layers of peat, the basis of the very special habitat that develops.  Unfortunately Sphagnum moss has been largely lost from the Peak District primarily due to pollution and wildfires. This reduces the contribution that the blanket peats can make to carbon storage that can help combat climate change as well as their wildlife value. 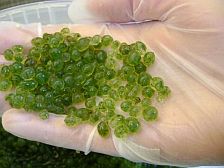 If the trial proves successful, Moors for the Future will use the technique to restore more than 2,000 acres of Peak District and South Pennine moorland over the next five years and will provide a lasting legacy that can be applied to degraded moorlands across the UK.

“We have championed many international biodiversity issues in recent years such as responsible fish sourcing and sustainable wood and paper products but moorland degradation is a problem in our back yard with an impact world-wide.

"It doesn’t get the profile it deserves so we hope that this innovative partnership will help draw attention to this vital work of saving the moorlands.

“The Peak District is at the heart of The Co-operative’s heritage - the first co-operative society was formed in Rochdale in 1844 and today we’re headquartered in Manchester. While previous generations may have taken this area for granted we now want to redress the damage caused by our forefathers in the industrial revolution. “

“England’s moorland blanket peatlands are a crucial buffer against climate change through their role as a carbon store but have been extensively damaged by centuries of inappropriate management and pollution. We have to stop the rot and ensure that peatlands are properly looked after as one of our most precious environmental resources.

“This project is seeking to understand and demonstrate how we can do this in the Peak District.  It is about restoring the natural bog forming species to the extensive blanket bogs in one of our best loved National Parks.  We want the peatlands to be as healthy as possible so they can supporttheir special wildlife, provide inspiration and enjoyment and function as an effective carbon store”.