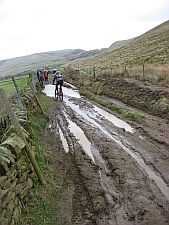 The Authority has launched a six-week consultation on its first proposed Experimental Traffic Order, which would exclude motorised traffic from Chapel Gate, a 3km track which skirts Rushup Edge, a high ridge between Chapel-en-le-Frith and Edale.

The trial would last for 18 months, giving time for repairs and recovery, and for the Authority to assess its success in conserving the national park landscape. After that it may decide to make the ban permanent, or to extend the trial, or to discontinue it.

Rights of way manager Mike Rhodes said: “Chapel Gate is officially classified by the Highway Authority as a Byway Open to All Traffic (BOAT), which makes it a legal route for 4x4s and trail-bikes. But it is now in a shocking state, with deep ruts, erosion and water damage.

“We have taken advice from the independent Peak District Local Access Forum which recommended temporary restrictions as a last resort after other options had been explored. The Authority has the power to make such orders to conserve the natural beauty and tranquillity of the landscape, and we believe that the conservation issues may outweigh the route’s recreational use by 4x4s and trail-bikes.”

The Authority is seeking responses from a wide range of organisations, including the Peak District Vehicle User Group which represents responsible 4x4 and trail-bike riders, as well as the Ramblers, Friends of the Peak District, the British Horse Society, Cyclists Touring Club, Byways and Bridleways Trust, Country Land and Business Association, parish and district councils, highways authorities and emergency services.

Anyone interested may respond by January 28 - details are available on www.peakdistrict.gov.uk/chapelgate or call 01629 816200.  A decision is expected shortly afterwards in the light of the feedback.