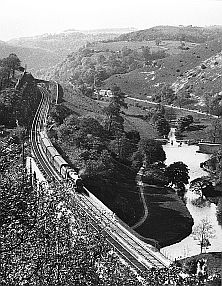 Do you remember trains running across the Monsal Dale viaduct? Did you work on the trackbed or at one of the stations at Rowsley, Bakewell, Great Longstone, Hassop or Millers Dale?

If you would like to share your Monsal Trail railway memories then Peak District Interpretation officer Catherine Bowmer wants to hear from you.

Throughout January, Catherine is looking for people willing to share their memories of the old London to Manchester railway line that ran through the Peak District National Park from Rowsley, north of Matlock, through to Millers Dale with a branch line to Buxton.

Catherine said: "I'm hoping to capture people's experiences of living beside, working on and travelling by the old railway line. I'm particularly looking for people who are happy to have their memories recorded to tell the story of this historic trail and recreate the atmosphere of the working railway line."

Perhaps you lived next to the railway and remember it being used to transport milk from Peak District farms to London? Or did you work at the Chee Dale lime kilns which closed in 1944? Maybe you travelled to work or school on the old Midland Railway Line?

Catherine explained: "The line closed in 1968 so people have worked on it, travelled on it and lived by it within living memory. We want to record these memories to create an audio history that will be available at three listening posts on the Monsal Trail as well as through podcasts and the internet."

If you would like to talk to Catherine you can contact her on 01629 816203 (Monday - Wednesday only) or email catherine.bowmer@peakdistrict.gov.uk

The work is part of the Pedal Peak District project that is reopening four tunnels along the Monsal Trail to create a new cycle route between Bakewell and Buxton funded by Cycling England and the Department of Transport.