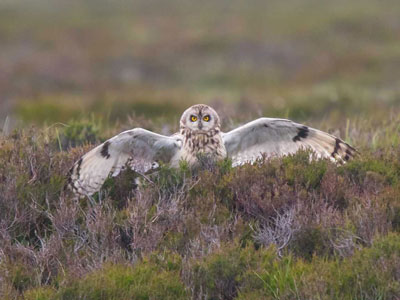 The Peak District Bird of Prey Initiative has published its 2021 breeding season report.

The report brings together data on key birds of prey or 'raptors' nesting within the moorland regions of the Peak District National Park.

Following a seasonal abundance of their preferred prey of voles, numbers of nesting short-eared owls in the recording area reached a record 30 pairs in 2021 - doubling previous counts of 15 pairs (2012) and above the initiative's target of 25 pairs.

For the third time in four years, hen harriers also successfully fledged young from a nest on National Trust moorland and whilst a second pair had also initially shown territorial behaviour, they were not subsequently seen.

There were mixed fortunes for peregrines, with eight occupied territories - just under half of the initiative’s target for the species - unable to match previous successes from 2020 with only three of the occupied nests fledging young.

All partners within the Initiative remain concerned that thefts of both eggs and young from peregrine nests previously focused within the White Peak, may now be affecting territories in the uplands of the Initiative study area.

Goshawk numbers continued an increase to 13 pairs, from a previous low of seven pairs, though the proportion of territories which successfully fledged young has dropped significantly over the same period.

The Peak District and UK’s smallest bird of prey, the merlin, continues to struggle with apparently good numbers of fledged young not yet translating into a wider population expansion in the reporting area. Further study and analysis of what happens to young merlin once fledged may be key to understanding how to turn around the fortunes of this enigmatic moorland raptor.

Two incidents of illegal bird of prey persecution were confirmed within the study area during 2021 - the theft of three peregrine chicks from one nest, and the shooting of a buzzard.

In addition, seven or eight further breeding failures remain unexplained – around half believed to involve the theft of eggs/young affecting peregrine and merlin, along with four cases where birds were not subsequently seen following initial territorial behaviour and display.

Responding to the results, Sarah Fowler chief executive of the Peak District National Park said: “A resurgence for short-eared owls alongside their favoured prey is a heartening reminder that our uplands can support charismatic raptors in numbers, an inspiring sight for those exploring the wilder side of the Peak District.

"The return of hen harriers with four fledged young is again testament to those taking care of their chosen territory and demonstrates the potential for this iconic species to call the UK’s first National Park home, given the opportunity.

"As in most years, the wider picture for birds of prey in the study area remains less clear with greater understanding needed of the challenges facing our population of breeding merlin, and an increasingly worrying trend in nest-based wildlife crime against raptors expanding from other parts of the Peak District.

"Invaluable insights of this kind into our top predators are only possible thanks to the dedication of many individuals and organisations; from the police, National Trust and raptor group volunteers, through to gamekeepers, land managers and staff from the National Park Authority who remain committed to seeing birds of prey in healthy numbers across Peak District skies."