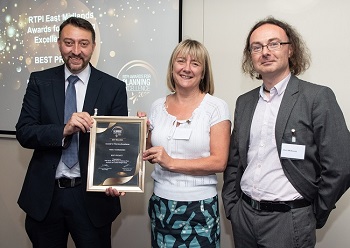 The work of Peak District National Park planners in achieving a high quality affordable housing scheme in a protected area has been recognised in the Royal Town Planning Institute’s East Midlands awards.

The Highly Commended award for Excellence in Planning for Communities was presented to the Peak District National Park Authority, who worked together with Derbyshire Dales District Council and Platform Housing, to achieve an affordable homes development for local people in need.

The close collaboration between the National Park Authority’s planners, the District Council and the housing association developer, resulted in the houses being built on a brownfield site in Bakewell, the largest town in the UK’s oldest National Park.

Colonel Wright Close is a development of 30 affordable houses built to meet local needs at an important gateway site in Bakewell, close to local schools and within walking distance of the town centre.

Brian Taylor, head of planning for the Peak District National Park Authority, said: “Colonel Wright Close is a good example of how we work with partners and developers to guide the right development in the right place to protect the special qualities of the National Park, whilst fostering the needs of its communities.”

Brian said: “The award is welcome recognition for our efforts in effective partnership working – it shines a light on the quality of the scheme’s design and our planning policies, which restrict new-build housing to that required to meet a local need for affordable housing or to achieve enhancement.”

The traditional design and layout of the scheme was the product of close working between the housing association's architects – Pelham Architects from Nottingham, and the Authority's officers. The Authority encourages innovative, contemporary designs, but at this important gateway site to the historic town with a strong heritage, a more traditional approach to the external appearance was considered more appropriate.

Brian said: “Thirty new houses is a significant development for Bakewell, the last development of this scale was another affordable local needs scheme about fifteen years ago on the Highfields estate nearby. This type and scale of development allows our communities to grow organically, protecting local services and facilities.”

The land was previously part of the Lady Manners School site and its development facilitated improvements to sports facilities at the secondary school and provided two playing pitches for the local rugby club.

The District Council supported the scheme by contributing £500,000 from its Right to Buy proceeds, the highest ever contribution it has made to affordable local needs housing.

The National Park Authority contributed £55,000 towards the cost of locally sourced natural stone from local quarries, less than 5 miles from the site (Once a Week, Sheldon for limestone and Dale View, Stanton for gritstone).

Construction of Colonel Wright Close began in 2019 and despite being delayed by the Covid crisis, was completed in 2021. There are 19 x two-bed dwellings; 5 x three-bed dwellings; 4 x one-bed flats and 2 x bungalows. The dwellings are semi-detached or in terraces of three or four properties.

The houses are occupied, rented with Platform Housing. All the houses are restricted to local people with a connection to Bakewell Parish or adjoining parishes, as required by the National Park's policies.

The housing scheme is named in honour of a Bakewell war hero, Colonel Leslie Wright, the last soldier to be rescued from the beaches of Calais in 1940.

A short film about the Colonel Wright Close development can be viewed on YouTube www.youtube.com/watch?v=9B-DjQEYr9I