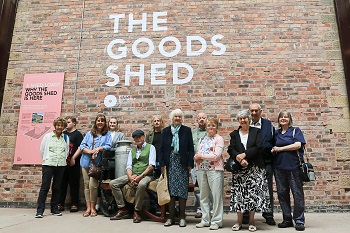 Once the bustling heart of activity at the busy Millers Dale station on the former Midland Railway line, the Goods Shed was last in regular use as part of the railway over half a century ago.

Having fallen into disrepair in the decades since, in 2019 the Peak District National Park Authority - who now own and manage the adjacent Monsal Trail and other station buildings – revealed an ambitious plan to renovate the imposing structure.

Supported by a grant of £320,000 from the European Agricultural Fund for Rural Development (EAFRD), the renovation set about re-instating or re-creating much of the original look and feel of the Goods Shed from its early 20th century heyday.

After delays brought about by the impact of the Covid-19 pandemic, the Goods Shed is now open and free to visit for all visitors to Millers Dale and the Monsal Trail.

Where railway staff once hurried about loading and offloading a range of goods and produce, instead the walls of the Goods Shed are now home to pictures and personal stories of the area’s history and its current role as host to one of the most popular all-user trails in the country.

The full height and scale of the building is showcased with a striking new roof, which has the modern addition of solar panels to help generate power for the facilities at Millers Dale.

A full-size replica of the original position of the line itself has also been added to the shed’s floor, with an audio soundscape playing as visitors enter providing the final part of the picture in this unique building.

New visitors to the area can also plan their next trip thanks to a large-scale map of the local area and additional visitor information accessed both electronically via a Wi-Fi hotspot and in person.

The Goods Shed is open and free to visit every day, weather permitting, during opening hours of the Refreshment Rooms café at Millers Dale station.

Quotes from people at the opening event who remember the Goods Shed and Millers Dale station in its heyday:

Betty Nesbitt recalled happy memories of sixteen years working as a junior clerk then senior clerk at Millers Dale Goods Yard, from the age of 17 until the line was closed in 1967. Betty said: "I spent many happy hours working here. It was very interesting and I enjoyed every minute." She remembers ordering trucks, invoicing companies and dealing with the variety of materials that were transported through the Goods Yard, including coal, quarried stone and animal fodder.

Bernard Carter, remembers travelling on the ramblers’ trains on Sundays and has a quote used on one of the display boards. He also provided an old photograph of his steam train driving Uncle Bertie for the new display. Uncle Bertie drove the Manchester to London express trains which ran through Millers Dale, and before retirement he drove the local trains from Millers Dale to Buxton. Bernard said: "It’s wonderfully nostalgic, I’m very pleased that Uncle Bertie’s photo is here in the Goods Shed to be remembered for years to come."

Harry Hartshorne lived in Millers Dale as a boy. His father worked in the railway station booking office and sub post office. He said: "My father worked here for twenty-one years. It’s nice to see some restoration taking place."

Joyce Emsen remembers a frantic taxi ride from Bradwell to Millers Dale on her wedding day, (also her 25th birthday), in February 1962, to catch the train with a one-way ticket to a new life with her husband in Worcestershire. Joyce said: "We had been delayed due to bad weather and the train was already in the station. We caught it just in time and one of our relatives wrote ‘Just Married’ in lipstick on the carriage as the train was pulling away!"