The following are a selection of characteristic or threatened species associated with the moorlands (upland heathland and blanket bog) of the Peak District. 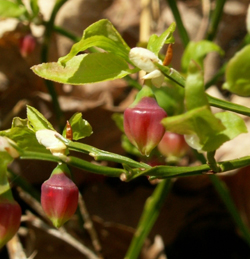 Bilberry is a dwarf shrub which is an important component of the heather moorlands (or upland heathland habitat).  Bilberry is also known as the whortleberry, blaeberry, whinberry or wimberry and has edible fruits.  The plant grows to around 50cm tall, has acutely angled stems, pinkish-red flowers, bluish-black fruits and it loses its leaves in the winter. 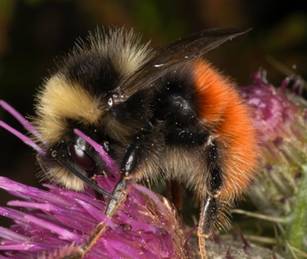 Scientific Name: Bombus monticola
Distribution: Localised
Conservation Status: No conservation designation
Where to see: Moorlands rich in bilberry in the South West Peak
When to see: May to September

A medium-sized species which emerges in early spring, the bilberry bumblebee has bright yellow bands on the thorax and red hairs on the abdomen.  This species is associated with upland areas above 300m altitude, feeding on bilberry, trefoils, clover and heather.  They nest on or below the ground, often using old animal burrows.  The bilberry bumblebee, like many of our bee species is in decline. 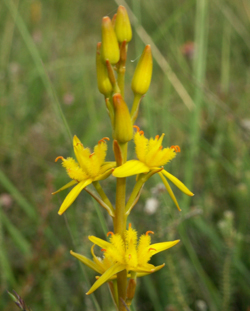 Scientific Name: Narthecium ossifragumDistribution: LocalisedConservation Status: No conservation designationWhere to see: Can be seen in road verges on the Warslow Estate in the South West PeakWhen to see: Flowers June to August

A member of the lily family, the sulphur-yellow flower spikes of bog asphodel can be seen in peat bogs, wet heaths and flushes in early summer.  The flowers appear from June to August, followed by orange egg-shaped fruits in the autumn.  A range of pollinating insects are attracted by the bright showy flowers. 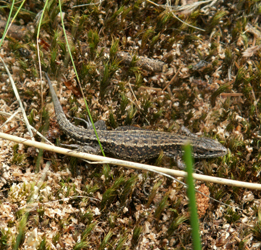 Scientific Name: Lacerta vivipara
Distribution: Widespread
Conservation Status: Protected under the Wildlife and Countryside Act
Where to see: Many locations, particular concentration on the Eastern Moors
When to see: Warm days in spring and summer

As the name implies common lizards are widely distributed in the UK.  They can be found almost anywhere from gardens, heathland, wooded glades, disused railway tracks, open meadows to the banks of ditches and along hedgerows.  In spring the males and females bask in the open to absorb the heat from the sun.  They will often use a stone, log or grass tussock close to cover for basking.  Not to be confused with newts which hide in thick grass or under logs and do not bask in the sun. 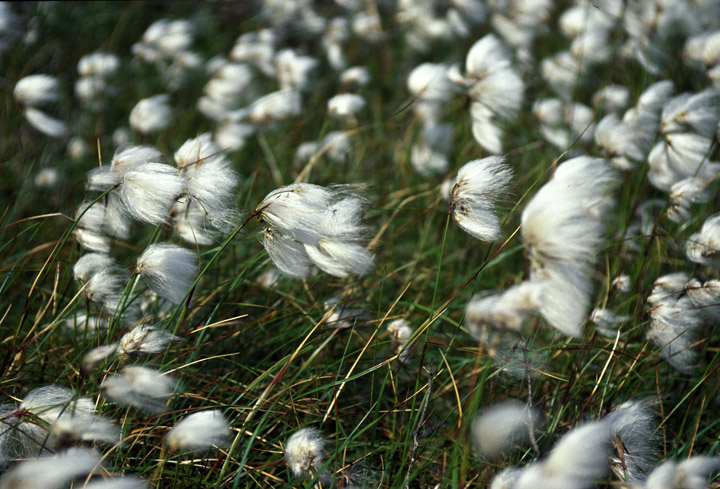 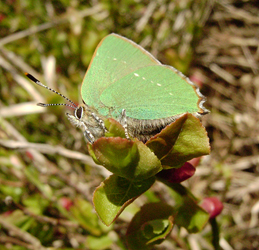 Scientific Name: Callophrys rubi
Distribution: Widespread
Conservation Status: No conservation designation
Where to see: Heyden Clough, Lantern Pike other moorlands
When to see: May to June

This butterfly is one of the earliest species to emerge in the Peak District and the only one that is more common in moorland areas than elsewhere.  It is widely distributed across the Dark Peak where it favours sheltered cloughs and slopes that contain a good growth of its main larval food plant, bilberry.  It can also be found along moorland roads and lanes with a narrow fringe of dense bilberry and where south-facing drystone walls provide a warm microclimate.  Where bilberry is absent, green hairstreaks may be found on gorse, sometimes on isolated patches of bushes in areas of heavily grazed grass.  It has been recorded up to 500m, though it is usually seen at lower altitudes.  Green hairstreaks also occur in the limestone dales of the White Peak, but in much smaller numbers.  Alternative food plants there include common rock rose and bird’s foot trefoil. 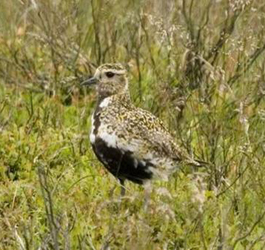 The golden plover breeds on upland heathland and blanket bog, where they are associated with areas of short vegetation.  A major food source comes from craneflies or ‘daddy long-legs’ which also inhabit the wetter areas of the moorlands.  Populations of cranefly are at risk from the drying effects of climate change, which is also predicted to impact on populations of golden plover.  Ditch blocking to re-wet blanket bog will help provide the right conditions for craneflies and in turn provide a food source for golden plover.  The South Pennines Special Protection Area (SPA) is of European importance for breeding golden plover. 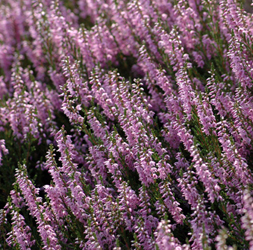 Scientific Name: Calluna vulgaris
Distribution: Widespread on the moorlands
Conservation Status: No conservation designation
Where to see: Good displays on many of the Dark and South West Peak moorlands including Stanage Edge, Eyam Moor etc
When to see: Flowers during August

Perhaps the plant most associated with the Dark Peak area of the Peak District, the purple-pink honey-scented flowers of common heather are a welcome if short-lived sight on the moors.  Attracting a variety of pollinating insects, heather provides a late-summer nectar source for bees such as the bilberry bumblebee.  Heather has four stages of growth: pioneer, building, mature and degenerate, when it lays down and ‘layers’ sending up new growth from old woody stems. 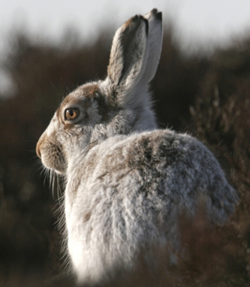 Mountain hares are native to the highlands of Scotland, but were introduced to the Peak District in the 19th century.  The mountain hare prefers areas of mixed heather and cottongrass moorland, and tends to avoid grassland.  They favour areas below the gritstone edges, especially if they have extensive boulder slopes below them, with cavities in the boulders enabling safe retreat.  The species has been lost from some of the smaller, more isolated areas of moorland  such as those in the South West Peak and at Eyam Moor in the Dark Peak, but seems to be relatively stable in its stronghold between Derwent Edge and Outer Edge in the Dark Peak.  The mountain hare’s brown coat turns white in the winter, a characteristic which may have evolved as a defence from predators. 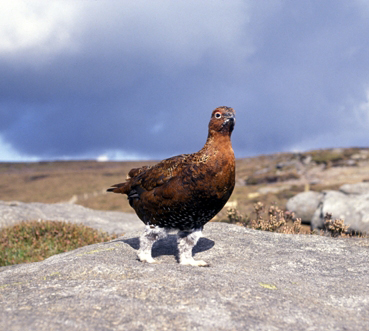 Scientific Name: Lagopus lagopus
Distribution: Widespread in the uplands
Conservation Status: UK BAP species, Amber Listed species
Where to see: Any heather moorland in the Peak District
When to see: All year round

Resident in the Peak District all year round, the red grouse is a familiar sight (and sound) of the heather moors and blanket bogs.  They feed on heather, seeds, berries and insects and nest amongst the heather.  The UK population is in decline, hence this species was added to the UK BAP priority list in 2007. 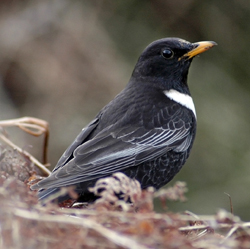 Also known as ‘mountain blackbird’ the ring ouzel is a migratory species which arrives in the spring to breed.  This is a rock-living species which has formed a local but fragile stronghold at Stanage Edge thanks to dedicated field staff and cooperation from visitors.  Ring ouzel feed on insects found amongst stands of bracken, and also eat worms and bilberries; later in the year rowan berries are a good food source.  Restricted largely to the upland areas in the north and west of the UK, the Peak District is the most south-easterly area where ring ouzels still breed. 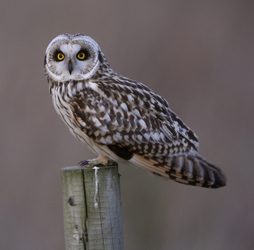 A medium-sized owl which can sometimes be seen hunting small mammals such as voles during the day.  In the Peak District, their preferred habitat in the open moorland, bogs and rough grassland, where vegetation provides sufficient cover to conceal their nests.  The Peak District Moors Special Protection Area (SPA) is a European designation for its populations of merlin, golden plover and short-eared owl. 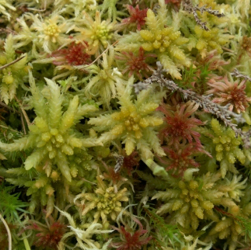 Scientific Name: Sphagnum spp.
Distribution: Widespread, but localised in the Dark Peak and South West Peak
Conservation Status: No conservation designation
Where to see: Blanket bogs
When to see: All year round

These mosses are a key peat-forming part of blanket bogs, they act like a sponge and can absorb more than eight times their own weight in water.  Peat bogs are a vital habitat for many species but also important in the battle with climate change as a healthy peat bog stores carbon and water.  Several species of sphagnum can be found in the Peak District, but in the past large areas have been lost due to acid rain from surrounding industry, and drying out and erosion of peat bogs.  The Moors for the Future partnership is currently working on a sphagnum propagation project to ‘re-seed’ degraded peat with new sphagnum plants. 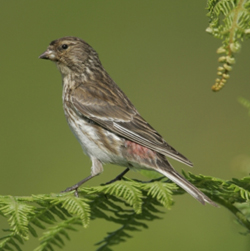 This little brown bird resembles a redpoll but with a longer tail.  Twite are dependent on moorland for nesting and moorland fringe habitats for feeding.  In England this species is restricted to the uplands of the Southern Pennines, with a dwindling population remaining in the Peak District.  One of only two British birds that have a diet comprising entirely of seeds, this may be the cause of its decline, as seed-rich grassland habitats have declined, reducing the late summer supply of seeds needed by twite.