The following are a selection of characteristic or threatened species associated with the woodlands of the Peak District. 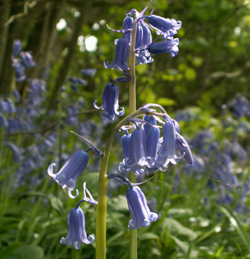 A characteristic sign of spring in the woodlands, bluebells are an indicator species of ancient woodland.  Relatively common in Britain and Ireland, bluebells are rare in Europe, and globally threatened.  The species has greatly declined over the past 50 years due to habitat loss, picking and uprooting for gardens, and competition and hybridisation with the Spanish bluebell. 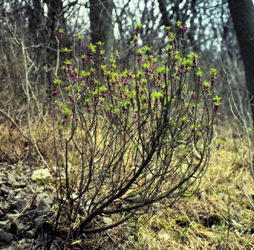 Scientific Name: Daphne mezerium
Distribution: Localised
Conservation Status: No conservation designation
Where to see: Limestone dales such as Dovedale
When to see: Flowers February to April

This woody shrub is associated with the upland ashwood habitats of the limestone dales.  The flowers are produced in early spring on the bare stems before the leaves appear.  The fruit is a bright red berry which is very poisonous for people, although fruit-eating birds like thrushes are immune and eat them, dispersing the seeds in their droppings. 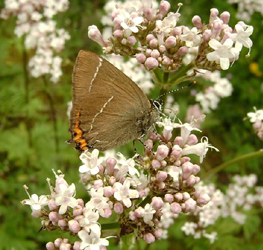 The White-letter Hairstreak is one of our more elusive butterflies as it flits high in the treetops.  It gets its name from the letter "W" that is formed from a series of white lines found on the underside of the hindwings.  The sole foodplant of this butterfly is the elm, including wych elm, English elm and small-leaved elm.  The outbreak of Dutch elm disease in the 1970s and 1980s had a detrimental effect on the species, and there were concerns it would become extinct.  It is, however, hanging on in the ashwoods of the limestone dales. 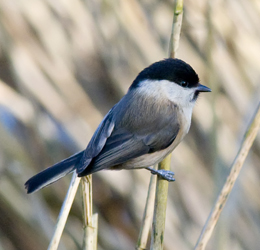 Found mainly in England and Wales, willow tits are often, but not exclusively, found in wet woodlands and willow thickets in damp places, such as the edge of peat bogs, marshes, and around gravel pits.  During the breeding season, willow tits feed mostly on insects, switching to seeds and berries in the autumn and winter.  They tend to nest in the cavities of dead trees or tree stumps.  The species has suffered a serious decline in the breeding population nationally, possibly as a result of changes in woodland management, with less management of woodlands leading to denser canopies and reduced shrub layers.  The willow tit is one of the target species in the Forestry Commissions woodland birds project, which offers targeted support to landowners and managers to improve the habitat for a suite of 16 vulnerable bird species.