This is my last Annual Report as I will be stepping down in September 2017 after seven years as Chair. As I come towards the end of my time on the Local Access Forum I wanted to highlight some of the significant work that members of the LAF have done to ensure that Access is provided for all.

Probably one of the most successful partnerships has been between Derbyshire Police, the Peak District National Park Authority, Derbyshire County Council and motor vehicle users.  Through consultation and discussion there is an agreed strategy which has led to greater understanding of the needs and benefits of appropriate behaviour in the countryside.

The Access Fund was launched in September 2014 as part of the celebrations for the 10th Anniversary of open access in the Peak District. The Access Fund is ring fenced for access improvements throughout the National Park and includes funding such items as new gates, access points, improvements to paths and signage.

As resources continue to dwindle and priorities have to be set, the consensus approach and partnership working that the LAF advocates has led to successful outcomes even on some of the most contentious issues.

It has always been a pleasure to chair the meetings as the members engage in constructive debate and seek consensus. Obtaining this consensus is important when considering that users of the countryside may all have valid but different interests. If we all continue to respect the rights and responsibilities of others the countryside will continue to provide pleasure and enjoyment for years to come.  As we know for many people that live and work in the Peak District National Park there are more benefits than probably most people recognise. Every year millions of visitors come in search of that special magic that can only be experienced

in a National Park.

Thank you for the tremendous work from the current and previous LAF volunteers, officers from the Peak District National Park Authority and Derbyshire County Council. The time and dedication is very much appreciated and must not be underestimated.

The Forum advises on the improvement of public access for the purpose of open-air recreation and enjoyment and in so doing takes into account the needs of land management and conserving the natural beauty of the area.

Membership of the Forum is reviewed regularly to ensure a reasonable balance between the number of members from land owning, recreation and local interests. Details of the current membership are included at the end of this report and at www.peakdistrict.gov.uk/laf. In 2016, Mike Johnson resigned after 7 years’ service on the LAF.

The Forum also undertook site visits to Derby Lane, Monyash and to report on green lanes in the Kirklees and Sheffield parts of the National Park.

In 2016, the Local Access Forum introduced audio webcasting for its meetings so that people could listen in live and following the meeting.

At each meeting of the Access sub-group, which met in April and July, the LAF considered access improvements and future initiatives for the Access Fund. Other matters discussed included landscape partnerships and proposals for the Authority’s woodlands, trails and estates.

In September the Forum welcomed the PDNPA’s proposals to identify and promote Miles without Stiles routes and celebrated in December the culmination of Accessible Derbyshire’s ‘big push’ to promote accessibility, the PDNPA’s award of Organisation of the Year, and its first accessibility report.

The County Council has provided the LAF with regular updates on progress in delivering Derbyshire’s Rights of Way Improvement Plan (RoWIP) and work towards its ten year review in 2017. During 2016 there has been continued emphasis on cycling through the continued expansion of the multi-user Greenway network; Pedal Peak II and the Pennine Bridleway National Trail. Other key issues have focused on the role of volunteers; proposed budget cuts and the review of the Rights of Way Service which the County Council provides.

The Forum was consulted on three possible traffic regulation orders and repairs on two routes during 2016. The LAF also carried out site inspections on priority routes in the Kirklees and Sheffield parts of the National Park. Legal status updates were provided by DCC and the PDNPA reported on the first meeting of the nationwide Motor Vehicle Stakeholders Working Group. The Green Lanes sub-group met in April and October

Member attendance at the LAF meetings in 2016. 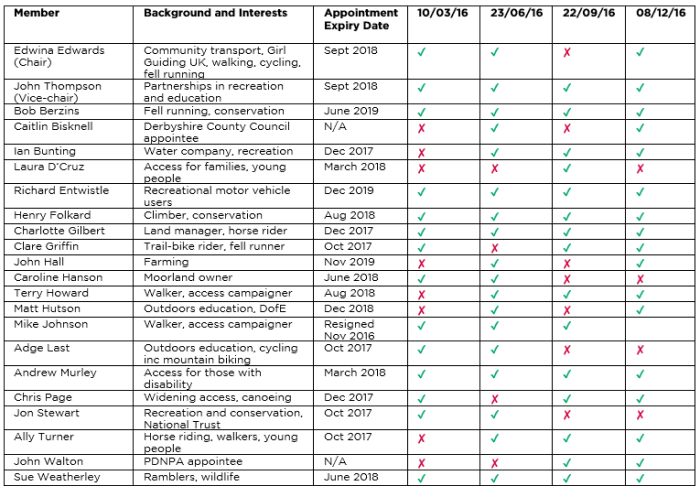