I was honoured to be elected in September as Chair of the Peak District Local Access Forum (having been Vice Chair), to follow on from Edwina Edwards who did an excellent job for 7 years. Her leadership, knowledge, skills and commitment were acknowledged at the September meeting and her continued involvement with the Forum will prove to be invaluable.

I am delighted to be joined by two Vice Chairs to share the work in Charlotte Gilbert (a horse rider and land manager) and Bob Berzins (a fell runner) who both have good experience and excellent service on our LAF.

The Countryside and Rights of Way Act 2000 included setting up Local Access Forums with this one being the first. We continue to work with quarterly meetings and the advice and support of two Sub Groups for Green Lanes and Access, and have a Joint Sub Group with the Derby and Derbyshire LAF reviewing the vital Derbyshire Rights of Way Improvement Plan. The approach to our work is to achieve consensus through understanding and working together on issues. We respond to consultations and provide advice on rights of way and access matters, and value the current efforts being made with partners to achieve increased accessibility by all to and within the Peak District, including the National Parks-wide initiative to pursue Miles without Stiles. Our advice and thoughts are offered as volunteers with a real love of the Peak District as strong supporters of the partnership approach which is crucial to successful working with other interests.

During 2017, we have had involvement in landscape partnerships across the National Park and initiatives for mountain biking, cycling and horse riding and are currently inputting to the National Park Management Plan Review, and its Partnership Delivery Plan. We have also been pleased to support opportunities for voluntary donations for access improvements via the Access Fund and Mend our Mountains and consider that there is a clear role for the Authority here without potential for conflict with other interests. The LAF, also, has an important role to play in identifying the need for improvements via its wish list.

Every year millions of visitors come in search of that special magic that can only be experienced in a National Park. Thank you for the tremendous work from the current and previous LAF volunteers whose time and dedication is very much appreciated and must not be underestimated, along with officers from the Peak District National Park Authority and Derbyshire County Council. In my first few months as Chair, I am enjoying working with very knowledgeable and committed colleagues. My thanks go to them all and, in particular the help and support we receive from Mike Rhodes, Sue Smith, Richard Pett and Gill Millward as officers for their hard work and guidance.

I hope that you will read the rest of the annual report with interest to understand the nature of the work that the Forum has undertaken over the last year and will take the opportunity to hear our discussions and advice at meetings which are now broadcast live.

The Forum advises on the improvement of public access for the purpose of open-air recreation and enjoyment and in so doing takes into account the needs of land management and conserving the natural beauty of the area.

Membership of the Forum is reviewed regularly to ensure a reasonable balance between the number of members from land owning, recreation and local interests. Details of the current membership are included at the end of this report and at www.peakdistrict.gov.uk/laf.

In 2017, Edwina stood down as Chair after seven years and was succeeded by John Thompson, the previous Vice Chair; Charlotte Gilbert and Bob Berzins agreed to share the duties of Vice-chair; Caitlin Bisknell, Laura D’Cruz, Caroline Hanson and Chris Page all left the Forum; and Jason Atkin, Joe Dalton, Geoff Nickolds and Dan Richmond-Watson joined.

The Forum also undertook site visits to look at the management of farming, conservation and access, a proposed Miles without Stiles route, and to the route at Wetton.

At each meeting of the Access sub-group, which met in January and April, the LAF considered access improvements and the funding for them via the Access Fund. The Forum was also updated on the Mend our Mountains fundraising campaign and expressed views on the Authority’s charity proposals. The Access Fund annual report was received at the December meeting

The Forum have been following progress on the identification of accessible routes in the National Park and in September contributed to the development of route selection criteria. The Authority’s work on accessibility was reported at the end of 2017 in its annual report.

The County Council provided the LAF with regular updates on delivering Derbyshire’s Rights of Way Improvement Plan (RoWIP) with the Peak District and Derby and Derbyshire LAFs working together to progress its ten year review. During 2017 there has been continued emphasis on cycling through the continued expansion of the multi-user Greenway network; Pedal Peak II and the Pennine Bridleway National Trail. Workshops have also been held on unrecorded ways.

The Forum was updated on the making of two traffic regulation orders and consulted on a proposal for another. The Authority reported on actions for the year ahead and progress on voluntary restraint, with legal status and repair updates being provided by Derbyshire County Council. The Green Lanes sub-group met in February and July.

Member attendance at the LAF meetings in 2017. 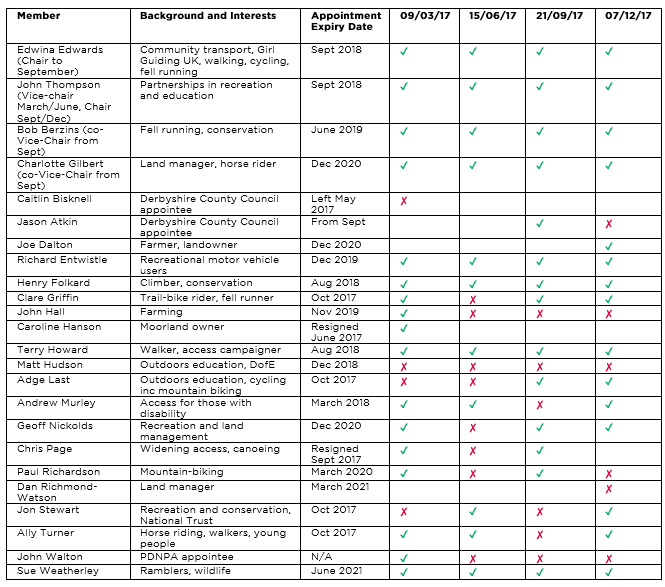