It has been a busy and productive year for the Forum with tremendous support from our two Vice Chairs in Charlotte Gilbert and Bob Berzins. We had 2 long serving members (Terry Howard and Henry Folkard), retire after giving wonderful support and advice. We appointed 5 new members and are now up to full strength of 22 members having considerable knowledge and enthusiasm which is greatly valued. At our September meeting we combined some member training with feedback about ways we could improve our work and links with constituent Highway Authorities and neighbouring LAF’s.

We respond to consultations and provide advice on rights of way and access matters, and value the current efforts being made with and by partners to achieve increased accessibility by all to and within the Peak District. Special thanks to all involved in developing the Miles without Stiles project, with 20 routes highlighted so far and a book funded by Yorkshire Water. Sustainable management of our Green Lanes remains a key area of work and advice which has led to consultations on Traffic Regulation Orders near Stoney Middleton and Wetton.

We made considerable input to the Review of the National Park Management Plan (NPMP) and were supportive in identifying members of the LAF to advise on how best to achieve delivery. The NPA’s Chief Executive has welcomed our approach and offers of input to achieve action on a number of key Areas of Impact – the first of which has been an excellent Workshop on Reviewing arrangements for Management of Events.

A Peak District National Park charity and board of trustees has now been established. We are looking forward to seeing how the Charity’s work and priorities evolve separately from the Authority and other charities in the Peak District. We have been pleased to support opportunities for donations for access improvements via the Access Fund and Mend our Mountains. The LAF also has an important role to play in identifying the need for improvements via its access wish list.

Our advice and thoughts are offered as volunteers with a real love of the Peak District and as strong supporters of the partnership approach which is crucial to successful working with other interests. Every year millions of visitors come in search of that special magic that can only be experienced in a National Park. Thank you for the tremendous work from current and previous LAF volunteers whose time and dedication is very much appreciated, along with officers from the Peak District National Park Authority and Derbyshire County Council. My thanks in particular for the help and support we receive from Mike Rhodes, Sue Smith, Richard Pett and Gill Millward as officers for their hard work and guidance, and to Jason Spencer and Karen Harrison who do a great job in minute taking. I hope that you will read the rest of the annual report with interest to understand the nature of the work that the Forum has undertaken over the last year and will take the opportunity to hear our discussions and advice at meetings which are broadcast live.

The Peak District Local Access Forum (PDLAF) is a statutory body, appointed jointly by the Peak District National Park Authority (PDNPA) and Derbyshire County Council (DCC). It covers the National Park and the countryside of north-west Derbyshire around Buxton, New Mills and Glossop. The Forum advises on the improvement of public access for the purpose of open-air recreation and enjoyment and in so doing takes into account the needs of land management and conserving the natural beauty of the area.

Membership of the Forum is reviewed regularly to ensure a reasonable balance between the number of members from land owning, recreation and local interests. Details of the current membership are included at the end of this report and at www.peakdistrict.gov.uk/laf

In 2018, two of our longest-serving Members stood down from the Forum. Terry Howard and Henry Folkard have been regular contributors to the Forum for 18 and 15 years respectively and were given warm thanks from fellow Forum members and officers for their wonderful commitment and contributions.

Vacancies have been filled by Dan Richmond-Watson, Roly Smith, Jez Kenyon, Louise Hawson and Alastair Harvey – each of them offering different perspectives and many years’ experience of improving and managing public access.

Issues discussed at the formal meetings in 2018 included:

At each meeting of the Forum and a meeting of the Access sub-group in February 2018, the LAF has advised and received updates on access improvements and the funding for them via the Access Fund which was established in September 2014. The Forum has also contributed to the Mend our Mountains fundraising campaign and the setting up of the Authority’s charity proposals.

In November, the Forum attended the launch of the National Park’s first 20 Miles without Stiles easy access routes showcasing the landscapes of the Peak District with categories for all, many and some. The Forum also visited Parsley Hay Visitor Centre in June to experience the range of inclusive cycles there.

The County Council provided the LAF with regular updates on delivering Derbyshire’s Rights of Way Improvement Plan (RoWIP) with the Peak District and Derby and Derbyshire LAFs working together to help progress its ten year review. In March, a presentation was given to the Forum relating to the work on Unrecorded Ways. During the year, there have been updates on the PRoW ease of use surveys, legal orders, funding secured for access work, the development and maintenance of the Key Cycle Network/ multi-user Greenway network, including Pedal Peak II and the Pennine Bridleway National Trail, as well as the valuable contribution from volunteers.

The work to review the National Park’s Management Plan and the delivery of outcomes for areas of impact continued during 2018. The Forum has a key role in inputting to this with LAF members taking this forward to offer support and advice based on their particular interests and expertise.

In March, the Forum was updated on the Authority’s action plans for the year ahead and received the first Green Lanes Annual Report. LAF members further welcomed the objectives for green lanes as part of the focus to look after these routes as a valued resource. The Forum was also consulted on two traffic regulation orders in 2018 and received updates on the progress of repairs by Derbyshire County Council.

Member attendance at the LAF meetings in 2018. 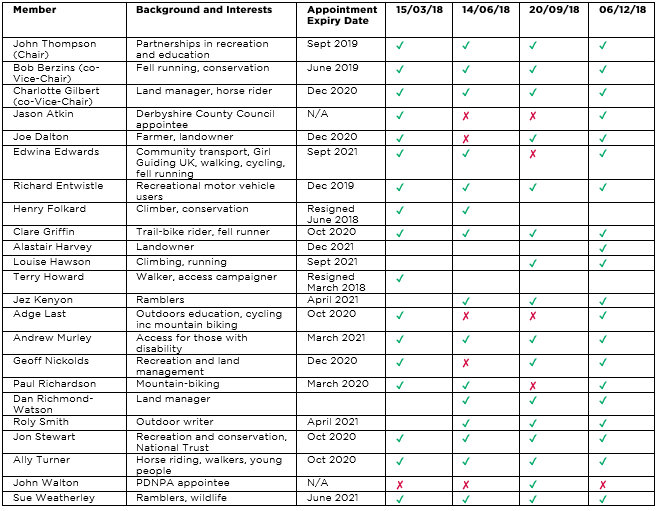