The value of our work is confirmed by the many years of involvement from our volunteers and the interest of others in joining us or for referring matters to us. In 2019, we were sorry to see a number of experienced members leave us but are looking forward to working with our new members.

In the 70th anniversary year of the legislation which gave us National Parks, the report of the Landscapes Review was published to which we had previously provided comment. We supported many of the proposals and have a record of our thoughts and suggestions for when we hope the work will be taken forward by the government.

We are looking forward to the Peak District Foundation’s work with the launch of their #70kfor70 campaign and have also been pleased to support opportunities for donations for access improvements via the Access Fund and Mend our Mountains.

We continue to give considerable input to the National Park Management Plan and have been involved in advising on management of events, climate change and refreshing the countryside code.

We have been pleased to support the efforts being made to achieve increased accessibility by all particularly with the development of the Miles without Stiles project and for green lanes which continue to remain a key area of work.

Our members are our greatest asset having considerable knowledge, enthusiasm and love for the Peak District. They are also strong supporters of a partnership approach which is crucial to successful working with other interests. Thank you for the tremendous work of our two vice chairs, Charlotte Gilbert and Bob Berzins, and all LAF members together with the excellent support from officers from the Peak District National Park Authority and Derbyshire County Council.

I hope that you will read the rest of the annual report with interest to understand the nature of the work that the Forum has undertaken over the last year and will take the opportunity to hear our discussions and advice at meetings which are broadcast live.

The Peak District Local Access Forum (PDLAF) is a statutory body, appointed jointly by the Peak District National Park Authority (PDNPA) and Derbyshire County Council (DCC). It covers the National Park and the countryside of north-west Derbyshire around Buxton, New Mills and Glossop. The Forum advises on the improvement of public access for the purpose of open-air recreation and enjoyment and in so doing takes into account the needs of land management and conserving the natural beauty of the area.

Membership of the Forum is reviewed regularly to ensure a reasonable balance between the number of members from land-owning, recreation and local interests. Details of the current membership are included at the end of this report and at www.peakdistrict.gov.uk/laf.

In 2019, Sue Weatherley and Adge Last, two long-term members who have contributed to the Forum for 10 and 8 years respectively, stood down after excellent service and advice. John Hall and Dan Richmond-Watson, representing land-owners, also departed. New members, Ben Seal and Steve Martin, brought to the Forum their focus on access to water and the environmental agenda.

Issues discussed at the formal meetings in 2019 included:

In February, the LAF welcomed the establishment of the Peak District Foundation and its ambitions and priorities starting with the #70kfor70 campaign for 70 years of National Parks. Updates on the Mend our Mountains works and funding were received at each meeting with LAF members also attending site meetings at Back Tor and at Cut Gate. The LAF also received updates on donations to the Access Fund for access improvements and the proposal for anniversary gates in the 20th year of the ‘freedom to roam’ legislation.

In February, LAF members attended the celebratory launch of the National Park’s Miles without Stiles handbook at Castleton Visitor Centre. This included an accessible tour of Peak Cavern from the Castleton Miles without Stiles easy access route. The LAF was also updated on the maintenance and development of future routes funded by the Access Fund and sales of the handbook and received the Accessible Peak District Annual Report.

During the year there have been updates on the rights of way ease of use surveys and surface improvements for Hurstclough Lane, Chapel Gate and Minninglow/ Gallowlow Lanes. Information has also been provided on progress with legal orders and the work of the joint LAF Sub Group in providing support for volunteers interested in helping to restore the record of rights of way before the 2026 cut off date, with an event being held at the Derbyshire Record Office in September in conjunction with the British Horse Society. The updates have also included information about the County Council’s Countryside Service Review, Derbyshire’s emerging Key Cycle Network (KCN) and the Local Cycling and Walking Infrastructure Plan which is being produced for the Derby, Derbyshire, Nottingham, Nottinghamshire (D2N2) area, as well as details of the funding which has been secured for rights of way and multi-user Greenway/KCN route development and maintenance, including the Pennine Bridleway National Trail. There has also been interest in Derbyshire Connect, a demand responsive bus service operating in the Ashbourne, Hartington, Wirksworth and Turnditch areas, along with the valuable contribution which volunteers make in carrying out much needed maintenance work and improvements to the rights of way and Greenway networks

At each Forum meeting and the Access Sub-group meetings in April, June and November, the LAF has considered long-term restrictions on Access Land. The LAF has also commented on the National Park Authority’s proposals and process for the disposal of minor properties and for the enhancement of the access and recreational interest at a number of key properties.

The Forum is part of the Management Plan’s Advisory Group which champions and advises on its implementation. In 2019, LAF members contributed to the Events Workshop in February, the revision of the Countryside Code in July, and the Climate Change Summit in October and reported back to each meeting of the Forum.

In March, the Forum was updated on the Authority’s action plans for the year ahead and received the Green Lanes Annual Report. LAF members supported looking after these routes as a valued resource and to link in with the Miles without Stiles work on accessibility. The Forum was also updated on the Traffic Regulation Order at Wetton Hills, repairs on routes, rural crime reporting and attended a site meeting at Houndkirk Road to consider damage on land adjacent to the track.

During 2019, the LAF received presentations by the Upper Derwent Catchment Partnership and on wild swimming. LAF members also inspected access for canoeing at Bamford Recreation Ground and the wheelyboat at Ladybower Fisheries.

The 20th Anniversary Year Ahead

The Peak District National Park Authority administers and provides secretariat for the Forum with officer input and financial support from Derbyshire County Council.

Member attendance at the LAF meetings in 2019. 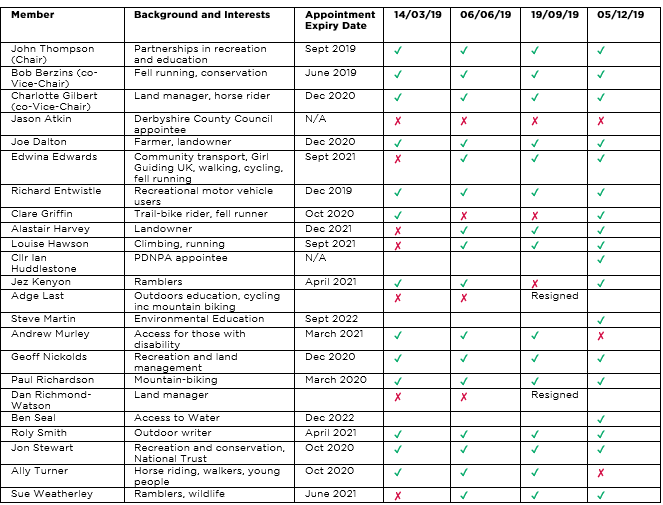