The Peak District is renowned for its naturally beautiful landscape... and yes, it is beautiful...but just how natural is it? Take a closer look and everywhere you will see evidence of the people who have lived here for thousands of years.

Nowhere is 'natural' as the types of plants and animals inhabiting the Peak are a direct result of how our ancestors have fashioned the land.

John Barnatt, senior survey archaeologist, has been explaining how tomorrow's technology is being used in a major new project which aims to unlock the secrets of the past.

John said, "Everything we see today has been influenced by what has happened down the ages. We're trying to produce a big picture, one that can be traced back through time and space. And with an area of 555 square miles to go at, that's quite a task!"

The team may be working with the past but their approach is bang up to date. John said, "We're at the cutting edge of 'ground breaking' research and we're doing it without even lifting a mattock or turning a sod."

He explained how traditional methods of archive research (delving into old maps and texts) were being combined with high-tech computerised mapping. "It's a bit like 'virtual archaeology' but the result is an impressive map-based historical interpretation for the whole of the Peak District. And it's in glorious Technicolor too!

The project is not just about understanding the past. It has a very up to date purpose. John said, "If people understand how the rich tapestry of historic landscapes contributes to the character of the Peak District and makes it so special then well informed decisions can be made when changes are planned.

"It's very exciting because by mapping the different historic characteristics, we've been able to show how the present landscape has been shaped by people in the past.

The work is being mainly funded by English Heritage and there are plans to involve local residents and visitors to ensure the needs of people are met today and in the future. John said, "We hope people will be interested when we are able to reveal the time depth behind those familiar 'picture postcard views'." 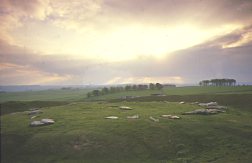 A pile of old bricks... some bumps in a field... a footpath climbing up onto the White Peak... not the sort of things to grab your attention during a day out in the National Park. But as archaeologist John Barnatt explains, such ordinary features can conceal fascinating secrets.

Archaeology's a funny old business. Digging up the past is a little like searching for the missing bits in a giant historic jigsaw. And like any puzzle, there are plenty of frustrations. Then, as the picture is revealed, there's excitement and satisfaction.

In the Peak District National Park there is a lot to be excited about. People have lived here for thousands of years and everywhere they've left intriguing clues about themselves.

As archaeologists, we try to put all the pieces together. At times it can be difficult because there's no picture on a box, and there's lots of missing bits. But, in the end, we get a good idea of what life was like for the men and women who used to live here and, by doing so, understand better the landscape we see today.

We want to encourage them

It's very important we don't keep that understanding to ourselves. Archaeology isn't a stuffy subject and with the publicity it's had with TV programmes like the Time Team, more and more people are wanting to get involved.

For some that can mean getting down on hands and knees and joining in the excitement of a dig. That's what's happened at Gardom's Edge where volunteers helped us, and colleagues from Sheffield University, excavate one of the best preserved prehistoric landscapes in Europe.

For others, the commitment can be less time consuming but just as enjoyable. In 1998 we opened up the site and over 1500 visitors came to learn what life was like 'on the Edge' between 5000 and 2000 years ago. We told them what we knew about the cup and ring designs found on the rocks, we talked about what it might have been like living in a circular house, and we put forward some ideas about what the great stone enclosures may have been used for.

But of course, we couldn't give them all the answers. No one can... because of the missing pieces.

That's what makes archaeology so fascinating. You can go so far with the facts, then you have to let your imagination take over.

It allows you to become a time traveller, where the pile of bricks you come across in the middle of nowhere can take you back into our industrial past - because this is where special bricks for Sheffield's early steel industry were made; or the bumps in a field tell you that thousands of years ago our ancestors toiled on the land with simple stone and wooden tools; or that the footpath you're walking on was made hundreds of years ago when miners climbed up onto the White Peak in search of precious lead.