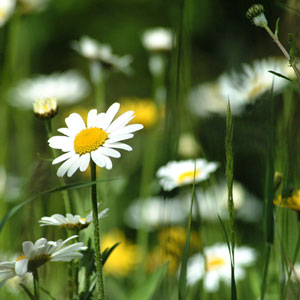 The land at Hard Rake was bought by the National Park Authority with a grant from the Heritage Lottery Fund with the aim of ensuring the conservation of the flower-rich grasslands. Hay meadow management of 14 of the fields allows the wildflowers and grasses to flower and set seed in the absence of grazing animals. The grass crop is cut in late July or August and made into hay, after which sheep and cattle are grazed.

A concessionary path which starts on the road between Bakewell and Chelmorton provides access to several of the meadows, joining up with a public footpath along the western boundary of the property. Please linger and look, listen out for skylarks which nest in the rough unmown areas and delight in the colours and textures of the array of wild plants. But remember that this is a farmer’s crop, valued as food for the farm animals in the winter time, so please don’t stray from the paths and keep your dog under control.

Typical species include ox-eye daisy, knapweed, hay rattle and meadow vetchling. Look out for common spotted orchids and, in the spring, cowslips.

The hay meadows are one of the jewels in the crown of Stanage-North Lees, rich in a dazzling array of wildflowers and grasses. The meadows are traditionally managed with farm animals removed from the fields in late April or early May to allow the grass crop to grow. This is then cut in late July or even August and made into hay for winter feed for the cattle and sheep. Animals are then grazed on the fields during the autumn and winter.

Supporting many species and more than 14 wildflowers and grasses considered to be indicators of ancient grasslands, the meadows on Ridgewayside are particularly special. Seed from these fields has been spread on the two meadows alongside the drive to North Lees Hall, where we are trying to restore a flower-rich sward.

The best time to visit is in June and the first half of July before the grass is cut. The earliest flowering species include adders tongue, a small grassland fern which is easily overlooked, and pignut, which has feathery leaves and a delicate mass of white flowers. It is the food plant for the chimney sweeper moth which you may also see. Alongside these you can also find birds foot trefoil or ‘eggs and bacon’. All these species are dependent on soils with low fertility and are easily lost from a meadow if artificial fertiliser is applied to boost yields.

In the middle of June the yellow flowers of hay rattle take centre stage. Hay rattle is dependent on a late cutting date every year because it is an annual plant with seeds which are only viable for 12 months. A single June cutting date can reduce the frequency of this plant or remove it altogether from the site. The white flowers of eyebright can also be found.

Later in June ox-eye daisy and common spotted orchid come into flower alongside quaking grass, various vetches and rough hawkbit. In July this intricate mosaic of colours and textures is joined by the really late flowering field scabious.

Please do visit to enjoy the flowers and associated insects and birds together with the landscape and views from these special places. However please stick to the footpaths to avoid damaging the grass crop and keep your dog under close control or on a lead.

The land owned by the National Park Authority at Taddington Dale includes three small hay meadows next to Waterlees Lane and a steep daleside which supports flower-rich grasslands on the upper slopes and ash woodland on the lower areas next to the A6.

Concessionary paths and access land allow access through the hay meadows to the daleside. Please enjoy this short walk from Taddington but remember that the meadows are used to provide valuable winter feed for the farmer’s animals. Please keep to the path through these fields and keep your dog under control everywhere on the property.

The best time to visit is from early May through to the end of July when the flowers are at their best. Early purple orchids, wood anemone and bitter vetch can be found on the daleside and ox-eye daisy, hay rattle and common cat’s ear in the meadows.