More than 100 years of campaigning and legislation have led to the freedom to roam on wild land. Here are the key milestones:

1600s - 1860
Parliamentary Enclosure Acts "fence off" half of England's countryside.

1725
Daniel Defoe claims the High Peak is "the most desolate, wild and abandoned country in all England".

1810
Wordsworth describes the Lake District as "a sort of national property, in which every man has a right and interest who has an eye to perceive and a heart to enjoy".

1872
The world's first national park is established at Yellowstone, USA.

1876
Hayfield and Kinder Scout Ancient Footpaths Association is formed. The "right to roam" movement has begun. 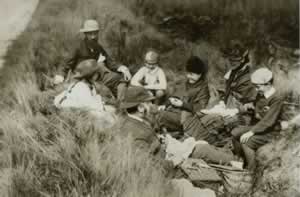 1880s–1900s
During Queen Victoria's reign, people's interest in rambling was growing. Several clubs that still exist today were formed such as the Manchester YMCA Rambling Club (1880) and the Yorkshire Rambler Club (1900).

1894
Hope Valley railway opens. Ramblers conflict with landowners as they head for the hills. The Local Government Act is amended to include some provision for rights of way.

1895
The National Trust for Places of Historic Interest and Natural Beauty is established.

1899
The UK Gamekeepers Association is formed.

1907
Forerunner of the Country Land and Business Association is formed.

1908
Another attempt to introduce an Access to Mountains and Moorland Bill fails.

1912
Society for the Promotion of Nature Reserves is founded by Hon. Charles Rothschild. It identifies places in need of protection with the aim of transferring them to the National Trust.

1919
The Forestry Commission is created to restore the country's woodlands: 400,000 acres had been felled during World War I. The outdoor movement booms. Every weekend, thousands of working class people escape the grime of the cities in search of clean, country air.

1925
The Law of Property Act gives the public the right of access "for air and exercise" to all commons in urban areas in England and Wales.

1926
Council for the Preservation of Rural England is formed. 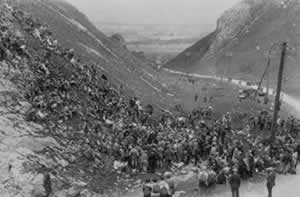 1929
Ramsay MacDonald sets up enquiry to investigate whether national parks would be a good idea.

1931
The Addison Report recommends there should be a National Parks Authority to select the most appropriate areas.

1930s
Proposals to make Dovedale the first national park. The depression created mass unemployment and, for many people, the only release was to get out into the countryside for cheap and healthy exercise. The northern moors were strictly preserved for grouse shooting and this led to demands for access and protest meetings in the Winnats Pass at Castleton and elsewhere.

1931–1932
A change of government and a severe financial crisis means Addison's recommendations are put on hold.

1932
On Sunday 24 April, 400 ramblers gather at Bowden Bridge Quarry, Hayfield to trespass on Kinder Scout. Protesters are met by gamekeepers and scuffles break out. Arrests are made and five men are imprisoned. After the skirmish the demonstrators continued along the path through William Clough and are joined by Sheffield ramblers who had walked via Kinder and Edale Cross. The whole group then walked along the Hayfield to Snake footpath to its highest point where they hold the "victory" meeting. The Rights of Way Act is passed.

1935
A conference, chaired by Norman Birkett, resurrects Addison's Central Authority for National Parks. Tom Stephenson suggests a 'Jubilee Trail' along the backbone of England. The Ramblers' Association is set up, amalgamating many clubs across the country. 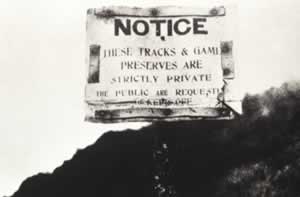 1936
On 26 May, first meeting of the Standing Committee on national parks.

1939
After 55 years, the Access to the Mountains Act finally succeeds.

1942
The Scott Report accepts the need for national parks and looks at problems facing the countryside.

1945
The Dower Report suggests how national parks could work in England and Wales. A new Labour government sets up the Committee on National Parks, chaired by Sir Arthur Hobhouse.

1948
The route of the Pennine Way is decided.

1949
On 16 December, the government passes the National Parks and Access to the Countryside Act setting up the Countryside Commission, the Nature Conservancy Council (now both Natural England) and ten national parks.

1950
A Landscape Area Special Development Order brings the design and materials of farm buildings in the Peak District, Lake District and Snowdonia under some planning control.

1951
The establishment of the Peak District National Park on 17 April brings the start of protracted negotiations leading to the first access agreements in the country for the public to walk on private moorland. The Lake District, Snowdonia and Dartmoor National Parks also designated. 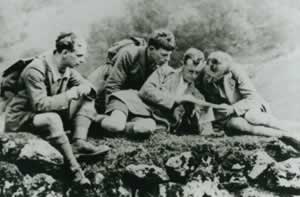 1953
The first agreement covering 5,624 acres of land owned by the Duke of Devonshire on Southern Kinder is signed with some additional areas belonging to the Youth Hostels Association and local Edale farmers in the same year.

1954
The Peak District National Park's Ranger Service is set up and the first ranger, Tom Tomlinson, is appointed to work as a warden in the Peak District in January. The Voluntary Warden Service is launched on Good Friday. Wardens are trained to help people appreciate the countryside. Yorkshire Dales and Exmoor National Parks are designated.

1955
In February, the first access agreement for Kinder is signed.

1957
Brecon Beacons, the last national park designated by the 1949 Act, is established. By the end of the year a further 15 square miles of south east Bleaklow are under an access agreement.

1961
An access agreement is signed for Langsett Moor. Windgather Rocks at Kettleshulme, near Whaley Bridge, are purchased to resolve a climbing problem. 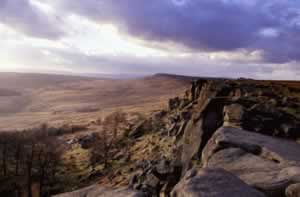 1965
On 24 April, 30 years on the Pennine Way is opened. The country's first national trail, it stretches 256 miles from Edale to Scotland.

1968
The Countryside Act is passed, imposing a duty on every minister, government department and public body to have "due regard for conserving the natural beauty and amenity of the countryside".

1974
The Sandford Committee recommends that national parks should have larger budgets and more staff.

1976
The year of the drought and the scene of many devastating moorland fires around the Peak District National Park.

1980
Roaches Estate purchased by the Peak District National Park in response to overgrazing and climbing problems.

1981
The Wildlife and Countryside Act is passed, the first comprehensive protection of listed species and habitats, and includes conservation schemes like Countryside Stewardship. Severn Trent Water in partnership with the then Peak Park Joint Planning Board pioneered the opening of Ladybower Reservoir and the removal of roadside fences. The Monsal Trail is opened.

1982
The 50th anniversary of the Kinder Mass Trespass. Sheffield Campaign for Access to Moorland (SCAM) is set up. In October, the National Trust buys the Kinder estate declaring it open for access in perpetuity.

1984
The largest holding of land to date is brought into the ownership of the national park when the 2,509-hectare Eastern Moors Estate was purchased from Severn Trent Water in order to provide access, and also safeguard ecological and archaeological sites. A House of Lords Select Committee suggests caring for the environment should have comparable status with the production of food.

1986
The last of the National Park Authority's major land purchases takes place: the acquisition of the 4,900-acre Warslow Moors Estate for nature conservation.

1987
European directive requires Environmental Impact Assessments to be made for major projects that affect the environment.

1989
The Broads is designated the eleventh national park.

1990
The Rights of Way Act is established by a Private Member's Bill.

1991
The 40th anniversary of the national park is significant for the increase in access land on the eastern side of the park. Agreements are reached with Chatsworth Estates covering the moors above the parkland and with Sheffield City Council for 2,073 acres of Houndkirk, Burbage and Hathersage moors. The total access area is now 81 square miles (half the total area of open country in the park). In the same year, the Pennine Way maintenance team starts the mammoth task of restoring the Pennine Way. The Edwards Report 'Fit for the Future' reviews national parks.

1993
Langsett Barn opens as a briefing centre, information centre and community centre providing improved facilities for the north-east corner of the park.

1995
The Environment Agency is established and the Environment Act 1995 is passed. Moorland fires cause closures of access land. Thornhill Trail is opened.

2000
The Countryside and Rights of Way Act 2000 is passed which introduces the right of access on mountains, moors, heaths and downs. The first meeting of a Local Access Forum takes place in the Peak District.

2001
On 17 April, The Peak District National Park celebrates its 50th anniversary. Rural businesses are blighted with the national outbreak of foot and mouth disease.

2002
The 70th anniversary of the Kinder Mass Trespass is celebrated. Loch Lomond National Park is designated.

2006
The National Environment and Rural Communities Act is passed.

2011
Eastern Moors Estate leased to National Trust and the RSPB.

2012
First areas of coastal access established in time for the Olympics. The tunnels on the Monsal Trail are opened.

2020
20th anniversary of the Peak District Local Access Forum and the legislation which created access land. #peakdistrictproud launched. Work begins on Anniversary Gates to celebrate and improve accessibility in the wilder places.