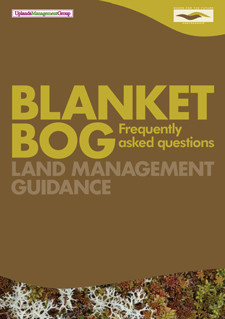 The moorlands of the Peak District National Park are of global environmental importance, made up of a variety of different habitats, dominated by large expanses of blanket bog and upland heath. Where peat depth is 40cm or more it is classified as Blanket Bog.

Heather burning is a legal activity over which the National Park Authority has no jurisdiction, other than on the limited areas of land that we own. Our own landholdings represent less than 5% of land within the National Park boundary, and burning has not been used as a management tool on our own land for some years. We therefore have no statutory powers to control or regulate heather burning within the wider National Park; nor, as a government-funded organisation, are we a campaigning body.

There is a significant consensus of opinion that burning on blanket bog (areas of moorland on deep peat) is detrimental to biodiversity, peat formation, water quality and carbon storage.

Our position on heather burning is that we support recent legislation to prevent burning of vegetation on protected blanket bogs in England, except in exceptional circumstances under license (see England’s ‘national rainforests’ to be protected by new rules - GOV.UK). This legislation came into force on 1st May 2021. Although it only applies to protected sites, this covers virtually all blanket bog (areas with over 40cm. depth of peat) within the Peak District National Park.

The new legislation will not, however, apply to areas of upland heath (areas of moorland with less than 40 cm. peat depth), which account for approximately 31% of moorland within the Peak District.  In these areas the balance of benefits and disbenefits is less clear. On the positive side controlled heather burning plays a role in maintaining moorland habitat, diversifying heather age structure, benefiting moorland birds of national/international importance and preventing and reducing the extent, severity and frequency of uncontrolled fires which could potentially have even more severe consequences.

On the negative side, excessive burning can result in issues such as a decrease in habitat and species diversity, cause smoke nuisance, and water discoloration. There is conflicting evidence on the impact of burning on carbon storage. The National Park Authority therefore currently recognises that heather burning on upland heath, done in accordance with the Heather & Grass Burning (England) Regulations 2007 and the Heather & Grass Burning Code 2007, can have environmental benefits.  However, we now use alternative methods of management on land in our ownership, and we are in discussion with moorland owners and managers about alternative ways in which the moors can be managed, where possible, to maintain their landscape and conservation value (and in particular reducing wildfire risk) whilst eliminating to reducing problems caused by controlled burning.

Other management techniques and guidance

Methods of heather and wider moorland management in the Peak District National Park vary depending upon the habitat condition of the moorland. Burning is one of a number of management measures employed in parts of the National Park. Other management techniques include the use of managed livestock grazing and cutting. The Blanket Bog Land Management Guidance FAQs* provide a detailed explanation of the management methods employed and why and when they might be undertaken, including burning.

* Published by MoorLIFE 2020, a Moors for the Future Partnership project in the EU designated South Pennine Moors Special Area of Conservation