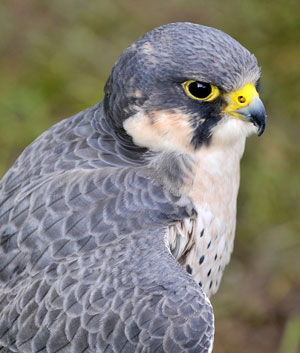 The Peak District Bird of Prey Initiative has published its 2020 final report, showing encouraging breeding successes for several bird of prey species in moorland areas of the Peak District, thanks to collaboration between landowners, gamekeepers and raptor workers during COVID-19.

The report brings together data on key birds of prey nesting within the Dark Peak and South West Peak - the moorland regions of the Peak District National Park.

Goshawks, which breed in woodlands on the moorland edge, also had a successful season, with 7 of the 9 known nests successfully fledging a total of 16-17 young, surpassing last year's 12 young from 8 nests. The last two years have seen a welcome increase in the number of goshawks successfully breeding in the Dark Peak.

Numbers of both species peaked in the area in the 1990s, and the Initiative has set a goal of restoring populations to those former levels.

Other species continue to give cause for concern. Merlin, a small falcon which is near the southern edge of its range on the Peak District moors, declined from a peak of 37 pairs in the 1990s to a stable population of 18-24 pairs throughout the 2010s. During 2019 there was a further drop to a low of 14 pairs, so a slight recovery to 16 pairs in 2020 was welcome. Those merlin that do breed are remarkably successful, with over 50 young fledged in 2020 suggesting that, for unknown reasons, young birds are failing to return to their Peak District breeding grounds.

Short-eared Owls remain difficult to monitor due to a combination of their tendency to be active at dawn and dusk; populations which naturally fluctuate widely from year to year with local vole populations and the fact that they may turn up at different locations from year-to-year. Nevertheless, populations appear to have been consistently lower throughout the 10 years of the Initiative compared to the 1990s. The year 2020 appears to have been poor for voles with no confirmed breeding records of short-eared owls.

After breeding for two consecutive years, there were high hopes that hen harriers would return to breed in the Peak District. Unfortunately, despite several early sightings, there were no confirmed breeding attempts.

The police confirmed 6 illegal incidents involving birds of prey in the study area during 2020. This involved 4 shooting incidents (3 buzzards and a short-eared owl), and 2 poisoning incidents (one involving a peregrine, and a further incident involving both a peregrine and a buzzard at the same location). In addition, an egg collector was arrested and convicted, following an alert to the police by local gamekeepers in the northern Peak District.

The Peak District Bird of Prey Initiative (BoPI) was set up in 2011 and is a collaboration of the Moorland Association, Peak District National Park Authority, Natural England, National Trust, National Gamekeepers’ Organisation and local police forces. It is supported by local raptor groups and land managers. It was formed to provide collective action to tackle illegal persecution of birds of prey and restore populations to sustainable levels.

Sarah Fowler, chief executive of the Peak District National Park said: "Despite the clear challenges the pandemic presented in 2020, we have seen encouraging breeding success this year for iconic upland species such as peregrine and goshawk. This has only been possible thanks to close collaboration between moorland managers, gamekeepers and local raptor groups along with the police, amongst many others.

"We have also seen the benefits of this partnership in the successful conviction of an illegal egg collector.

"The increase in and range of bird of prey persecution incidents recorded by police in 2020 is an unwelcome trend, and any act of wildlife crime within the National Park remains one too many.

"The levels of occupied bird of prey territories continue to present an ongoing challenge, but the progress of peregrine and goshawk this year shows us what can be achieved."