Launch of Audio Chapter Kinder Scout - Voices From The Peak 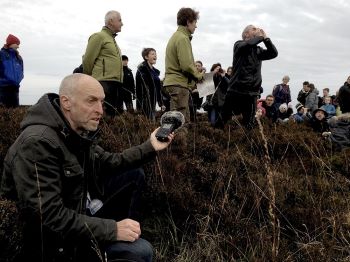 The third chapter of Voices From The Peak audio artwork is being released on Saturday 24 April to mark the 70th anniversary of the Peak District National Park.

Derbyshire poet and recording artist Mark Gwynne Jones has created the series of audio-artworks, collectively called Voices From The Peak, which features three immersive chapters – soundscapes of the varied lives, landscapes, and unheard stories of this strange and beautiful region.

Described as “Ideal for wandering in spirit while cooped up at home”, Voices From the Peak combines natural atmospherics, spoken word, and music to capture the spirit of the Peak District and bring it to the ears of the listener.

All three chapters, ‘Burning Drake’, ‘Snow!’ and ‘Kinder Scout’ are available to listen to online at www.peakdistrict.gov.uk/voicesfromthepeak

The series begins in the underworld of the limestone and through anecdote, humour and some startling observations, and leads us to the Kinder Trespass, the creation of the UK’s first National Park, and the now vital battle to heal the moorlands - a huge carbon store eroded by years of acid rain.

Mark Gwynne Jones said, “It’s an honour to be working with the Peak District National Park. As a poet born in Derbyshire, I have a lifelong love of the region, its people, wildlife, and diverse terrain.

“It’s almost a cliché now to say that the pandemic has forced us to reconnect with where we live, but recording people and the natural world this past three years has been a revelation. There are so many stories with surprising connections running through the land here. These recordings have unearthed something magic and I can’t wait for people to hear it.”

“And with that pioneering spirit in mind, I hope everyone will appreciate as part of our 70th anniversary celebrations, the latest chapter of the Voices From The Peak soundscape which focuses on the connections between people and place. Chapter 3 Kinder Scout is particularly significant as it brings to life those links between the past and present that linger in the landscape.

“However we are able to celebrate – either in person or through the inspiring digital spaces available to us in 2021, I’m sure everyone will want to reflect on the difference our national parks have made to throughout the country.”