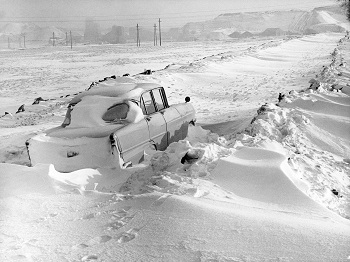 A seasonal new video titled Snow! featuring a montage of rarely seen photographs of past winters in Derbyshire’s Peak District has been launched online today (30 December, 2021).

The video brings together old photographs of deep snowfalls, roads blocked with snow drifts and more, along with archive recordings of voices and stories of people who lived through those times, as well as voices from today.

The audio-visual journey through winter wonderlands has been created by poet and recording artist Mark Gwynne Jones and sound producer Paul Hopkinson, with Alex Ivanov and Anna Kerr. The work features pictures courtesy of Picture the Past and the music of PsychicBread, Ashley Hutchings, Esther Swift, and Hannah James singing the Castleton Carol.

Mark Gwynne Jones says: “I’m excited to release the video of Snow! I hope people will enjoy this seasonal combination of old photographs, archived recordings and modern voices – it’s fascinating to look back at pictures of some of the harsh winters we experienced back in the 1960s and 70s before the days of double-glazed windows and central heating.”

The video is free to watch on the Peak District National Park’s website www.peakdistrict.gov.uk/voicesfromthepeak from Thursday December 30.

Voice clips from the video include:

“My dad said there’s no higher ground between us and the Ural Mountains. And when the wind blew from the east you could feel the truth of it. On the tops the farmers called it a lazy wind. Lazy... because it doesn’t bother to go round you.”

“No wonder we remember drift filled lanes and the snow taking weeks sometimes months to thaw. In the 1970’s the Dark Peak regularly recorded more than 70 days of snow a year. Now it’s down to about 45 days…”

For more Voices From The Peak- journeys through the Peak District in word, film and sound - visit: https://markgwynnejones.com/voices-from-the-peak-2/

Photo courtesy of Picture the Past: Peak Dale, 1964.