"There were hundreds of young men and women, lads and girls, in their picturesque rambling gear: shorts of every length and colour, flannels and breeches, even overalls, vivid colours and drab khaki…multi-coloured sweaters and pullovers, army packs and rucksacks of every size and shape." - Benny Rothman, speaking in 1982, recalling the moment he addressed ramblers before setting off on the Mass Trespass.

PHOTOGRAPHY & ARCHIVE: The National Park Authority has limited access to archive material associated with the Mass Trespass, but both the Working Class Movement Library and Picture the Past may be able to assist with further content on the event.

What was the Kinder Mass Trespass?

On 24th April, 1932, hundreds of men and women defied the law to walk over hills and moorland to the plateau of Kinder Scout, Derbyshire, in what would become the Peak District National Park.

The protest was led by 20-year-old Benny Rothman, Lancashire secretary of the British Workers’ Sports Federation (BWSF), which organised walks and cycling trips for young workers from Manchester and surrounding mill towns.

It followed a confrontation with gamekeepers, three weeks earlier, during a BWSF Easter camp when ramblers attempting to reach another peak, Bleaklow, were turned back.

The plan for the Mass Trespass was for ramblers from Manchester to meet up with groups from other places - including Sheffield - at the Kinder plateau.

Estimates vary of the numbers taking part - at the time the Manchester Guardian estimated 400 people had been involved in the Mass Trespass.

The BWSF had called for a rally in the village of Hayfield on 24th April - but this was a diversion, drawing in one third of the Derbyshire police force, which expected Communist unrest. Meanwhile, trespassers met at Bowden Bridge quarry, with Rothman addressing hundreds of ramblers before they set off.

At William Clough, trespassers were confronted by gamekeepers and scuffles broke out. A gamekeeper was injured. The trespassers broke through, running through prohibited land to Kinder plateau and meeting up with ramblers from Sheffield from the 'other side'.

Trespassers agreed to walk back to Hayfield ‘with heads held high’ – but police were still there, waiting to make arrests.

The arrest of six young men – and subsequent imprisonment of five – unleashed a wave of sympathy for the ramblers and fuelled the ‘right to roam’-movement. 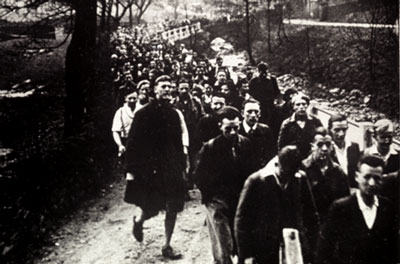 Benny Rothman and five other ramblers were arrested and charged with unlawful assembly and breach of the peace. They pleaded not guilty and were remanded to be tried on 7th and 8th July at Derby Assizes.

"We ramblers, after a hard week’s work, in smoky towns and cities, go out rambling for relaxation and fresh air. And we find the finest rambling country is closed to us… our request, or demand, for access to all peaks and uncultivated moorland is nothing unreasonable." - Benny Rothman, speaking in his defence at the trial at Derby Assizes.

Five of the six were found guilty of riot and received punishments of between two and six months in prison. They were:

What was the right to roam movement?

A growing movement over more than a century for the right of all people to have access to the countryside.

Early 19th century - romantic poets such as Byron, Coleridge and Wordsworth write about the inspirational beauty of the ‘untamed’ countryside.

1884 - the first freedom to roam bill is introduced to Parliament by the MP James Bryce. The bill fails – but the campaign has started.

Early 20th century - there’s a growing appreciation of the great outdoors and the health benefits of exercise in the countryside, especially by people working in industrialised towns and cities. But conflicts emerge between people demanding greater access to the countryside and landowners.

1931 - a government inquiry recommends the creation of a ‘national park authority’ to select areas for designation as national parks. No action is taken and discontent grows.

1932 - the Kinder Mass Trespass and harsh punishment of leader Benny Rothman and his associates unleashes a huge wave of public sympathy and fuels the right to roam cause.

1936 - a voluntary sector Standing Committee on National Parks (SCNP) is formed, arguing the case for national parks and urging the government to act. It is the result of groups of leisure enthusiasts and nature conservationists coming together to lobby the government for measures to protect – and allow access to – the countryside for the benefit of the nation. Parties include the Ramblers Association, the Youth Hostels Association, the Council for the Preservation for Rural England and the Council for the Protection of Rural Wales.

1945 - pressure culminates in the White Paper on National Parks, produced as part of the UK’s post-war reconstruction. A committee is set up under Sir Arthur Hobhouse to prepare for national park legislation while campaigners keep up public pressure.

1949 - a landmark year as the government passes the National Parks and Access to the Countryside Act, paving the way for the creation of national parks. Lewis Silkin, Minister for Town and Country Planning, describes it as ‘…the most exciting Act of the post-war Parliament.”

But the rest of story only begins here! To find out more about more milestones from our 70-year history, see our anniversary timeline.