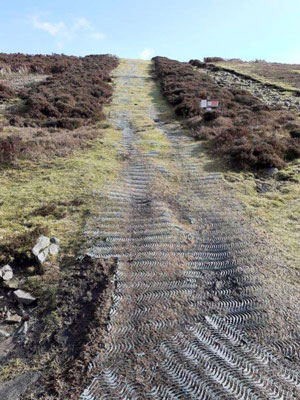 The Peak District National Park Authority has welcomed a decision by the Planning Inspectorate to uphold an enforcement notice against a geotextile track installed on Midhope Moor, approximately 18km north-west of Sheffield and 3.5km south of Langsett.

Originally laid for the purposes of facilitating temporary access to support conservation works, planning permission had not been sought prior to the track’s installation. A subsequent planning application in 2018 was refused on the grounds of the track being unacceptable within the open landscape of the moor.

An enforcement notice issued by the Authority for removal of the track was subsequently appealed, but this appeal was dismissed by the planning inspectorate in November 2021.

The appellant's claim for an award of costs in part or in full against the Authority was also refused.

The Authority's enforcement notice requires removal of the track - consisting of geotextile matting and sections of log 'rafts', but the appellant argued this should be retained with repairs to some sections.

Following the appeal decision, the landowner will now be required to remove the track and restore appropriate vegetation cover, to mitigate the visual impact of the track route within the landscape, within12 months. He is also required to implement ongoing establishment of vegetation cover along the route for a further 30 months.

A spokesperson for the Peak District National Park Authority said: "We welcome the conclusion to this appeal case and the Inspector’s decision to uphold the enforcement notice for removal of the track, along with the refusal of costs to be awarded to the appellant.

"The Inspector’s comments include recognition of the environmentally sensitive nature of the area, that the track remains highly visible in the landscape and that it is ‘clearly distinguishable’ despite vegetation changes following its installation."

The inspector also noted that the geotextile material used has a specification targeted at temporary use only, and is not a permanent surface material, resulting in a likely requirement to replace sections of deteriorating track in future so increasing the track's visibility in parts.

You can view the supporting documents for this appeal.