As well as making some changes in your home and work life to help biodiversity, you could get involved in other ways:

Take part in a Project
Current projects in and around the Peak District include:
Stepping Stones to Nature
Calver Weir Restoration Project (information on this project coming soon)
Crayfish Arks Project

Set up your own Project
There are sources of funding and support for community projects, try the Peak District Sustainable Development Fund (SDF)

Get involved in Surveys
Below are links to current wildlife surveys and recording events & activities:

On March 25th 2011 Buglife and the National Trust launched a public oil beetle survey in partnership with Natural England and Oxford University Museum of Natural History. 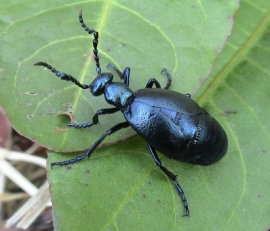 Oil beetles are conspicuous, charismatic insects which dig out nest burrows on bare ground. This means they are often seen on footpaths and can be encountered when walking and enjoying the countryside. The best time of year to look for oil beetles is March to June.

Four of our native oil beetles are now extinct in the UK. The four remaining species are the Black oil beetle, Violet oil beetle, Rugged oil beetle and the Short-necked oil beetle. All four species are in decline and consequently three of these have recently been added to the UK Biodiversity Action Plan (UKBAP) list of Priority Species. Information on the distribution of oil beetles is limited. More data are needed to allow Buglife to assess the conservation status of these species, and target effective conservation action.

You can help by joining in the hunt. Visit Buglife’s website for more details.