North Lees Hall can be found in a secluded position above Birley Lane and adjacent to one of the main footpaths/bridleways from Hathersage leading north to Stanage Edge.

A settlement was first mentioned here in 1306 with the existing grade II* listed Tower House dating from 1594 and probably replacing an earlier Elizabethan timber-framed hall house. Its design has been linked to Robert Smythson, (architect of Hardwick Hall) and incorporates three principal rooms, one above the other, all with Elizabethan features, which are linked by a spiral elm staircase. Behind are four floors of service rooms with lower floor to ceiling heights – an early split-level design. The tower house was restored in 1962 by General Sir Hugh Beach for use as a guest house. The restoration included the plaster ceiling decoration which was replicated from photographs and surviving fragments. The Hall was acquired by the Peak Park Joint Planning Board in 1978 along with the surrounding North Lees estate, and was leased to the Vivat Trust in 1988. The Vivat Trust converted the building into self-catering holiday accommodation with help from the Architectural Heritage Fund. They also renewed the flat roof to the tower, in lead, with grant aid from the Peak District National Park Authority. This gives stunning views over the surrounding countryside.

The two storey side extension (called the East Wing) incorporates 17th century elements alongside later remodelling; it is now a farmhouse.

The barn above the Hall is listed grade II. The oldest section dates from the late 16th century and has four sets of crucks, dendro-dated to the mid 1500s. Later extensions date from the 18th and 19th centuries. The small outbuildings to the rear of the Hall are also listed grade II. These were service buildings to the Hall, latterly in agricultural use. There is no public access to these buildings although the rear of the barn is visible from footpaths to the north. 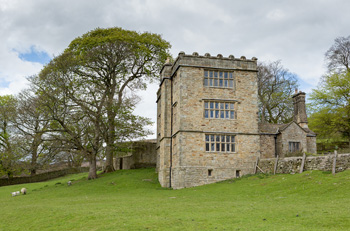 In 1845 Charlotte Bronte visited the Hall several times while staying with her friend Ellen Nussey at the Vicarage in nearby Hathersage. It became the principal inspiration for Thornfield Hall in the novel ‘Jane Eyre’, described as: “three storeys high; a gentleman’s manor house; battlements round the top gave it a picturesque look”. They still do!

Please note: The Hall is currently let as a residential property.