Help to protect Ring Ouzels on the Sheffield Moors

Ring Ouzels arrive back at Stanage and Burbage every March to breed after a marathon flight from their wintering grounds in North Africa. With the area also attracting more than half a million human visitors each and every year, it is a source of great pride that by working together, Ring Ouzels and people can co-exist in these precious landscapes. 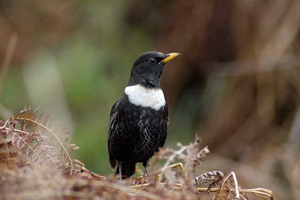 Why do they need protecting and how can you help?

Ring Ouzels, also known as Mountain Blackbirds, are part of the heritage of Stanage and Burbage. But nationally numbers are declining dramatically and they are red-listed as a species of major conservation concern. Based on British Trust for Ornithology figures, numbers fell by 72% between 1991 and 2012.

Stanage and Burbage are designated at the highest European level as a Special Protection Area for rare upland birds. The following measures to protect Ring Ouzels, agreed through the Stanage Forum process, will also help others that nest and feed, including Snipe, Curlew, Reed Bunting, Whinchat, Wheatear and Linnet.

These should not restrict your enjoyment but could greatly help nesting success:

Your help is especially important during the breeding season, from the beginning of March to the end of July.

Where and when can I see Ring Ouzels?

Ring Ouzel look like blackbirds but with a white crescent on their breast.

This shy, rock-loving bird prefers a nest site on or below the Edges, usually overhung with rock or vegetation, but they sometimes nest in bracken.

The males can often be seen singing from a rock or flying low across the moor to collect food. Early in the season (March/April) is often the best time to see them as they noisily sing from prominent crags and boulders to proclaim their territory, but you’ll have to pick your time – dawn and dusk are best.

They feed on worms, insects in the bracken, and later in the year, bilberry and rowan berries. Bizarrely, the roadside mounds have become their favourite feeding areas in recent years, due to the fertile soil attracting worms and other invertebrates. It is common for them to nest twice in a season, between early April and the end of June.

You can report sightings of Ring Ouzels in one of the following ways: