Stanage Pole can be found high on the moors behind Stanage Edge. A wooden pole has stood here for hundreds of years marking the border of Derbyshire and South Yorkshire, Hathersage and Sheffield and probably the ancient kingdoms of Mercia and Northumbria. It is on an ancient packhorse route known as the Long Causeway and must have been a useful landmark to travellers over the years. It’s still important today as a focus for walkers and cyclists. 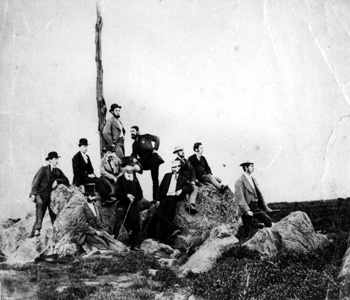 We believe the last pole was erected in 1915 by Sheffield Corporation. In 2015 it was in danger of falling and so was taken down for safety reasons. With the help of the British Mountaineering Council and other local supporters the pole was replaced in a public ceremony on 17th April 2016 , the 65th anniversary of the National Park. Over 400 people came to watch the pole being hoisted into place with ropes, tripods and man-power, primarily volunteers from the British Mountaineering Council.

Many individuals and organisations were involved in the design and the preparation of the new pole including antique restorer/ designer Chris Wells, Sheffield Clarion Ramblers, the Cutlers’ Company, Durham Foundry (Sheffield) Ltd, Hope Cement Works and officers of the Authority. The new pole is a larch tree trunk sourced from one of the small plantations adjacent to the Long Causeway. It is located within a steel socket in its original position between two boulders. A circlet of iron-work gives a sense of grandeur whilst significant location-focused information can be found on the cast-iron foot. Planning permission for the replacement pole was granted on 12th February 2016.

For more information about the history of the Stanage Pole have a look at this edition of ACID Newsletter (4MB).

If you would like to make a donation then please visit our donate section.