The death of her first husband in World War 1 (1917) was the catalyst for Ethel wanting to protect the countryside and make England a good place for the heroes and heroines of both world wars to return to.

She spent most of 1942 in London, "leading the national organisation in the crucial early debates on how the post-war reconstruction of the country should be achieved by democratic planning".

In 1928, she fronted the appeal to save Longshaw Estate (now looked after by the National Trust) from development, and later helped acquire land around Sheffield that became its green belt, in 1938. In 1945, she was appointed to the UK government's National Parks Committee, and helped to make the successful case for the National Parks and Access to the Countryside Act of 1949, which led to the founding of the Peak District National Park in 1951. She also helped make green belt land part of national government policy in 1955.

"I believe our aims are too profoundly important to let go". 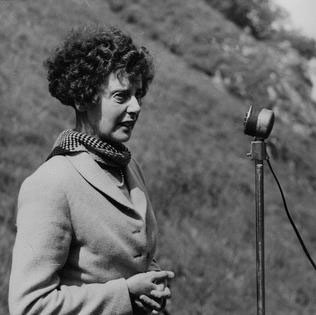 At the start of World War 2, when many of her fellow CPRE administrators were away on active service, Ethel Haythornthwaite wrote: "Unquestionably, CPRE and all its branches should strive their best to hold on. If not, much more of England’s beauty will be lost for those who return after the war. I believe our aims are too profoundly important to let go. Those who see what rural England means to the English should work to save it."

In 1924, along with 12 concerned individuals, Ethel formed the Sheffield Association for the Protection of Rural Scenery, also known as the Sheffield Association for the Protection of Local Countryside. They met at Endcliffe Vale House, her family home which stood where the Endcliffe Student Village is today. In 1927, the group became the Peak District and South Yorkshire branch of the Council for the Preservation of Rural England, later renamed Campaign to Protect Rural England (and the branch later became Friends of the Peak District). Ethel was the group’s honorary secretary from its inception in 1924, for 56 years, until 1980.

In 1928, Ethel Gallimore led a public appeal which helped raise the money to buy the Longshaw Estate, which was threatened with development. The 747 acre estate was gifted to the National Trust in 1931.

"Whatever else is forgotten, the Branch will go down in history as a major force in environmental conservation because of the achievement of its two 'grand purposes': the designation of a national park in the Peak District and the creation of a permanent Sheffield Green Belt. But there were so many more equally successful campaigns in the wider countryside and urban fringe that the reader gasps with admiration. And at the head of this crusading society for so long, the tireless, single-minded, and selfless Ethel and Gerald Haythornthwaite were without parallel. We shall not see the likes of Ethel and Gerald again".

You may like to explore Ethel’s life further with this film from Campaign For National Parks...