For Viv and Jim Marriott, working in the Peak District National Park was a true labour of love.

The couple were volunteer rangers together for 16 years - working on a wide range of projects and always happy to share their knowledge and enthusiasm for the National Park - until Viv sadly passed away in December 2021.

Viv and Jim - both retired primary school headteachers - were well known and respected for their work, not just as National Park rangers but in their wider voluntary roles and as advocates of the outdoors.

Together they hosted ski groups in Switzerland with walking and special interest company HF Holidays. They also ran their own business, Winteralps4all, leading winter walks in the Swiss mountains.

Closer to home, in Buxton, they volunteered for Zink and High Peak food bank, collecting food from supermarkets for distribution by the food bank. 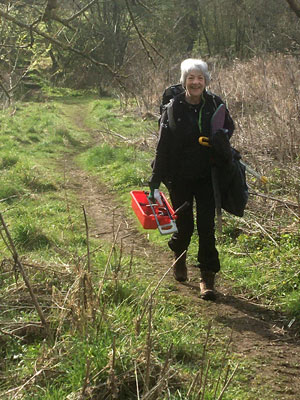 Viv was vice chair of the Buxton Festival Fringe, a member of Buxton Town Team and the twinning town committee. She volunteered with Still Waters Memory café, leading walks for people with Alzheimer’s and dementia.

Jim - who is continuing as a National Park ranger and in other voluntary roles - has been deeply touched by the many tributes paid to Viv, highlighting her warmth, kindness and generosity.

He says: "We met so many people through our activities. We never had trouble making friends. Viv was a great communicator and, whenever there was a chance to chat to people, we’d start a conversation.

"As rangers, we’ve always gone where something needed doing, whether practical - such as planting trees or doing surveys - or promotional work. We did a lot of promotional work for the Peak District National Park Authority and the Foundation at events such as Eroica, Hope Show and Chatsworth Country Fair, as well as pop up events.

"People would comment on how nice it was to chat - we'd give them ideas for things to do in the Peak District, not just walks but where to eat or to stay.

"Viv believed in the National Park - as do I. We had holidays in different national parks and both valued what special places they are and what a valuable part they play in the fabric and culture of this country. They give access to the outdoors, allowing people to be with others - in walking groups, climbing groups, engaging in social activities and so much more."

Jim’s involvement with the Peak District dates back to his early childhood, in the 1950s. He recalls: "My dad, Arthur, worked in the steel industry at Staveley Company and he had a big thing about getting out into Derbyshire at weekends. 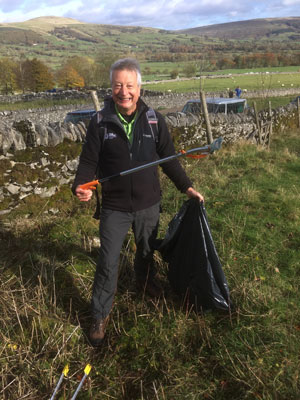 "He brought me out here shortly after the Peak District was designated as the UK’s first national park. We'd get a bus from Staveley to Chesterfield and then take the Hulley's bus into the Peak District. The bus was invariably crowded and sometimes we didn’t manage to get on, which was a big disappointment. We'd walk instead to Holymoorside.

"Some of my earliest memories of days out in the Peak District are trips to the Eagle stone, near Baslow Edge, and to Curbar Edge. It was like a big adventure playground for me - I loved clambering on the rocks.

"We’d also take tours into the Peak District, organised by Branson’s bus company. They ran from Chesterfield market place and Branson’s would have a line of buses, taking trips into the National Park. Some were mystery tours while others were to specific places, such as Ladybower, where you’d have an hour to explore.

"We were always taking those trips. They were advertised on a chalkboard in the market place and my dad would study them intently. It’s interesting that my mum never featured in our trips - she’d be at home cooking and doing housework. Those were different times...

"Later, as a pupil at Chesterfield Grammar School, I got involved in the Duke of Edinburgh Awards and in a youth club, where we were encouraged to do voluntary work in the National Park. At the age of 14 or 15, I was installing boundary posts. You could say I was a ranger long before I became an actual ranger."

University and his subsequent teaching career took Jim to London, where he met Viv during the 1970s.

"Viv was from London and she'd never been walking - the furthest she’d ever walked was to the bus stop!” smiles Jim. “Most of the people I knew in London weren’t outdoor people and most Sundays I’d go walking in the Chilterns, generally on my own.

"I invited Viv to go walking with me - warning her that, if she was thinking of us having a relationship, that I’d be returning to live in Derbyshire at some point. She joined me on a walk - and got the bug. She started to really enjoy the countryside, noticing far more than I did. She developed an incredible knowledge of wild flowers and also became interested in the wider environment.

"We moved from London to Herefordshire, living in the Welsh borders where we were able to get out into the wilds. Soon, that wasn’t enough, so we started visiting the Alps.

"Viv became a mountaineer - she was fearless in the mountains. She'd stride along a narrow ledge, while I wanted to nervously crawl along on all fours. She became a ski guide and, together, we’d host ski groups for a Swiss hotel."

Jim kept his word about one day returning to Derbyshire and the couple set up home, first in Litton, then in Buxton.

Jim says: "I can’t remember exactly how we became rangers, but it was probably Viv’s idea. Her passion was learning and discovery. She was very keen and loved meeting and talking to people about the National Park.

"We both had a thing about overcoming disadvantage. Mine stemmed from my working class background and feeling a bit of an underdog at Grammar school. Other kids were middle class and more advantaged... for the first time I realised that some people had more opportunities than others. That is very much the case now - perhaps even more so.

"Viv loved children. She wasn't so much driven by disadvantage but by wanting the best for every child, regardless of their abilities or where they came from. Viv thought more about other people than herself all the time. I was championing the underdog while Viv wanted the best for people. She was always more positive than me – she was the glass-half-full one in our relationship.”

He adds: "It's a well-known fact that if you go out into a beautiful place, no matter what your problems or depths of despair, it affects you positively.

"When Viv was ill, I didn’t have the chance to come into the Peak District and it affected me greatly. Two days after Viv died, I drove to Hassop and walked along the Monsal Trail.

“It’s so important to have this sort of trail for people to access easily - a simple way for children, families and individuals to get outside and experience the outdoors.

"We should cherish these places, where you can clear your head. You can’t put a value on that - accessibility is massively important. And national parks lead the way on that - in the countryside generally, no-one is guaranteed an accessible footpath.

"I greatly value the support of the ranger service, too. It’s like a fantastic family. At Viv’s funeral, I felt there were arms around me, both metaphorically and physically."