Jasmin became a countryside worker apprentice in 2019, gaining a place as one of three apprentices on an apprenticeship scheme organised by the South West Peak Landscape Partnership in the Peak District National Park, supported by the National Lottery Heritage Fund.

Brought up in London, Jasmin enjoyed dog walks over Hampstead Heath a small area of "countryside" in the city as she describes it. With an active interest in history, Jasmin took Celtic Studies at Aberystwyth University, intending to follow a career working in museums and galleries. However, following time spent in Canada, where she experienced working on a sheep farm, her interest was sparked for working in the countryside back home in the UK. 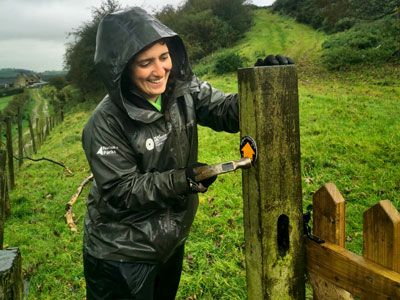 Jasmin says: "I never thought working outdoors was for me, I’d set myself up for a world of museums and galleries. Showing people snippets of our cultural heritage and paintings of our historical pastoral pasts. Never had I ever considered that I might one day work in such a landscape.

"I became an apprentice when I was 27, which is older than apprentices usually are, but it was the best way for me to gain the skills and experience I needed to follow my new career path to work in the countryside. When I applied, we did a day of hedge-laying under The Roaches, it was a great day, and I remember thinking, 'This will do!'"

She has found that her appreciation for cultural heritage has complemented her desire to work in the countryside with learning traditional skills and crafts and being able to apply them practically in tasks such as hedge-laying and drystone walling. 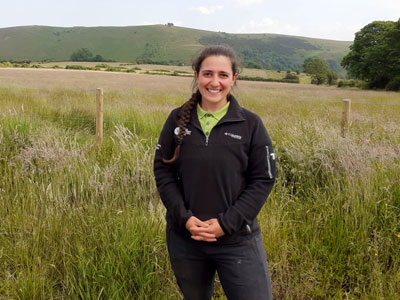 As part of the apprenticeship, Jasmin has gained a Level 2 Diploma in work-based Environmental Conservation, which has involved a range of activities, including helping to plant 20,000 sphagnum plugs on moorland at the Roaches, an area that had been previously damaged by fire. She is proud to say: "Working with another apprentice, the two of us managed to plant 2,000 plugs in one day!"

Jasmin has also worked replacing stiles with wicket gates to improve access. "It’s satisfying to do something that makes it possible for more people to benefit from walking in the countryside. We were able to keep working outside during the pandemic and after the lockdowns it was noticeable how appreciative people were of being able to enjoy the National Park. Most people are respectful and keep their dogs on leads and take their litter home, and most really enjoy engaging with nature on their walks. The Peak District is a great outdoor space but it does need to be protected and supported."

One of her favourite activities during the summer is identifying wild flowers and grasses. "Working in a protected landscape has helped me learn so much about wildlife and the importance of biodiversity. This year is our 70th anniversary but I’m interested in seeing where we will be in thirty years’ time, when the Peak District National Park turns one hundred."

Looking to her own future, Jasmin is keen to build on her skills and knowledge and to gain further experience in animal husbandry. Her aspirations are to find ways to do more to bring farming and conservation together. She says: "The majority of farmers in the Peak District value opportunities for wildlife on their farms and are willing to put in the effort to improve things for nature. I want to look at conservation grazing to find out about methods of farming that can aid biodiversity."

Jasmin says: "For young people, whether you have been to university or not, apprenticeships are an incredible way to get into an industry and learn new things. I could not have changed track without doing one."

The South West Peak Landscape Partnership countryside worker apprenticeship was made possible thanks to funding from the National Lottery Heritage Fund.