Rhiane Fatinikun gazed out of a train window at the passing Peak District landscapes and vowed to discover more by taking up hiking.

Little could she have envisaged that, less than three years later, she would not only be the founder of a massively successful, nationwide hiking organisation, but would become a leading voice in challenging stereotypes and promoting greater diversity in the countryside.

In 2019, Rhiane was shortlisted in the Boots Women of the Year Awards in the 'Wellness Warrior' category and, in 2020, she was named Campaigner of the Year in The Great Outdoors Magazine Awards. She is shortlisted as a Positive Role Model in the 2021 National Diversity Awards.

A Mountain Training Ambassador, Rhiane is also Stylist magazine's 'Strong Women' hiking columnist and is regularly featured in the wider media. Appearances include BBC Countryfile, Granada Reports and Channel 4 News. She is a trustee for Anti-Racist Cumbria. 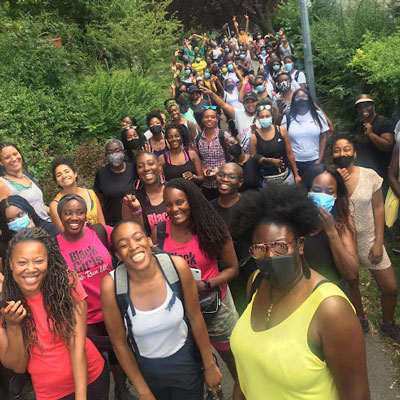 It all started with that journey through the Peak District and an invitation on Instagram for other women to join Rhiane on a hike.

"I can’t actually believe what we’ve achieved," says Rhiane, a former civil servant from Greater Manchester. "Even though I don’t live far from the Peak District, I’d never previously thought of going there. But I’d been on a course in Barnsley and, as I was travelling back on the train, I started thinking how I really wanted to start hiking.

"I have plenty of free time, so it was about trying something new and different - something more productive. I wanted to get out more and also to create a safe space for other black women."

Rhiane's first experience as a walk leader was also her own first-ever hike. "I didn’t know how to read a map, so googled walks in Greater Manchester and tried to memorise a route for our first walk," she recalls. "I was just winging it! Since then I’ve learned hill and mountain skills and learned to navigate and plan routes."

Most of the early walks were in the Peak District but Rhiane has since led walks across the country and also introduced members to other outdoor activities such as caving, climbing and paddlesports. Black Girls Hike is now a registered non-profit, with regional groups across the UK hosting regular hikes, activities and training weekends.

"I'd no idea Black Girls Hike would grow like this - I thought it was just going to be a little walking group," says Rhiane. "The best thing is the friendships which are being made. Depending on what you’re doing in your life, you don’t always meet people you can really connect with. It's like networking meets the countryside!

"I think the group gives a sense of belonging - it’s like a sisterhood. Meeting new people and feeling supported is good for your general wellbeing and mental health. We’re cheerleaders for each other."

Black Girls Hike has provided a platform to challenge stereotypes. When Rhiane highlighted a lack of black faces in adverts for outdoor clothing, businesses took note.

She has since modelled for outdoor clothing and equipment firm Berghaus and is a brand ambassador for the company.

While tackling certain stereotypes, Rhiane says that experiences with Black Girls Hike has overturned one much closer to home. "A lot of people have an idea that the countryside is not welcoming to people of colour," she explains. "But we’ve realised that it’s a lot more welcoming than you think. We have some lovely conversations with people we meet on our hikes. So I hope that, when other people see me and the girls out there, they’ll think 'it will be ok'."

She adds: "Black Girls Hike has given me more confidence to try new things. I feel fitter and more motivated. I’ve always been outgoing and quite adventurous, in that I like to travel. But I was never really outdoorsy.

"Nothing grows in the comfort zone. If you don't put yourself out there, you never know what you’re capable of."