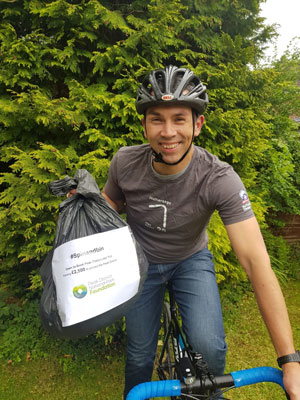 Alex Waddington has a deep and intricate association with the Peak District National Park.

A trail runner (bad knee permitting), hill walker, trig bagger and road cyclist, he also describes himself as a nocturnal Dark Peak Roamer - experiencing the national park in its quieter, most meaningful moments.

It's a role he relishes and takes very seriously. In June 2020, Alex raised £1,500 for the Foundation in his Spin ‘n’ Bin challenge, cycling for 17 hours, from dawn until dusk, collecting litter along his 107-mile route. "It was a shame it was necessary, but hopefully it helped raise awareness - and also some funds to help keep the Park special."

Born in Wakefield, Alex grew up in Bradford. He says: "Mum didn’t drive, so we took buses and trains everywhere and spent a lot of time gazing out at scenery and being outdoors, around the edges of the Yorkshire Dales National Park.

"After graduating, I moved to Manchester in 2004 and then Stockport in 2007, where I live with Catherine and my two girls. They have both done Kinder with me as a rite of passage - to varying degrees of enthusiasm!

"In 2003, I worked for nine months for the Yorkshire Dales National Park as their media officer, which was a fantastic job. As a townie, it taught me a lot about National Parks, and it was great fun getting out with the rangers from time to time.

"A few years ago, I got myself very fit to raise money in memory of my dad and started doing long distance walks and runs in the National Park - the wonderfully-named Dovedale Dipper and the Baslow Boot Bash to name a couple, which got me out into new areas of the Peak District.

"I’m not anywhere near as fit as I once was, due to injuries, but I’ve completed the famous 56-mile Bullock Smithy Hike around the Peak District five times and the Peak Skyline ultra trail race three times. Doing and training for those challenges has got me out into all corners of the National Park. I’ve also done a few long bike rides through the National Park. I’ve had some wonderful experiences and love seeing the Park change in character and mood.

"One of my favourite, less obvious, places is Axe Edge above Buxton. It can feel so remote, with great character and interesting industrial heritage, and yet you’re never far from a road.

"Kinder has always been an escape for me during challenging times. I lost my dad suddenly at the start of 2014 and I found myself drawn to Kinder at all times of the day and night. I remember standing at the top of Grindsbrook Clough at 8am one winter’s morning, looking at the sunrise over a snowy Edale Valley, tears streaming down my face, preparing myself for his funeral later that week. It was a desperately sad time, but having the Park to escape into helped. It’s definitely helped me maintain my mental health, in lots of ways.

"During the pandemic, when it was permitted, I used Kinder as an escape. One snowy morning, heading off Kinder, I literally stumbled into the lair of a mountain hare, sat there down a snow hole. I managed to watch it for a few seconds before it clocked me and made a run for it. It was a magical moment. I’ve also seen some stunning cloud inversions, like being on an aircraft - the type of thing you’ll only see if you’re out of bed early. I’m not religious but at times it has felt spiritual.

"I feel lucky to live so close to the National Park - it was only over lockdown, when we were exploring local paths, that I realised that Cown Edge, which is literally two or three miles (uphill) from my house, is inside the boundary. I can run/walk 30 minutes from my front door and get to a trig point where I can see Saddleworth to the North, Kinder to the East and Shutlingsloe to the South - so the UK’s original National Park is never far from my mind or view."