Sally Hodgson is a Master Craftsman dry stone waller. Dry stone walls are built from stones without any mortar holding them together. Their unique construction depends on the type of stone available, its intended use and local tradition. Firstly, a foundation is made forming the base of the wall, then parallel walls are built up on either side of the foundation, these are wider at the base than at the top. Large flat ‘through’ stones are laid at several points that stretch across the entire width of the wall to interlock the courses and make the wall stronger. The space between the parallel walls is filled with smaller stones to pack it. Some walls are topped with vertical ‘coping’ stones. Often older walls are constructed from stones and boulders cleared from the fields during preparation for agriculture, or stone would be quarried nearby.

Born in Shropshire, Sally’s family moved to Derbyshire when she was three years old. She describes her life being ‘normal’ up until the age of ten - then her parents bought a derelict farm in the Dark Peak of the National Park, and life changed forever. 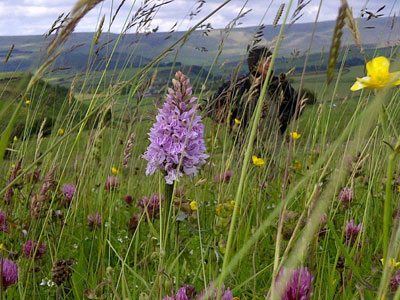 "It was a childhood dream, I’d read and re-read Enid Blyton’s Cherry Tree Farm novels and wanted to live in a place at the end of a track with grass growing up the middle of it and there we were, lucky enough to live it,” says Sally. “Our family’s favourite book was Seymour's Book of Self Sufficiency - it was a bible for people wanting to live the ‘good life’. As a ten year old, I was reading it to learn how to make bricks from clay, cure rabbit skins of animals my brother had caught, and I had a little free range egg business."

Sally’s father had grown up on a farm and then worked as an engineer, she says: "Dad was very in tune with nature and was sympathetic to the land before it was fashionable - he didn’t use fertiliser when others were, so with his background and knowledge, we farmed and practically made it up as we went along. I grew up learning about the nature that was all around us and being part of it."

Sadly, her father was diagnosed with cancer and whilst undergoing chemotherapy he showed Sally how to work the machinery and gather the hay in. She said: "It was a strange turn of events that led me into walling professionally - I'd completed a course at Bretton Hall Art College, at Wakefield, then went travelling, but I wanted to support what my parent’s had started and needed an income so I started mending and building walls for other people.

"It took a lot of hard work to get to the level of Master Craftsman but partly due to the way I was brought up I’m very competitive with myself, ambitious really and a bit stubborn! There are four levels of training, I did Level One and Level Two and then stopped as my work stood up for itself, but then I was invited to teach for the College of the Peak which was all about sustainable crafts and construction." 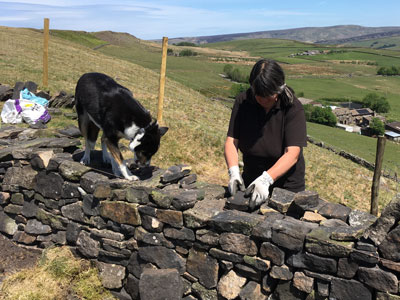 "As a qualified waller, you can only teach to the level below the one you have achieved, so I continued and did Level Four. I was also competing successfully in walling competitions. I was the third woman ever to become a Master Craftsman and the first to become an examiner."

The title of Master Craftsman was awarded to Sally by the Dry Stone Walling Association DSWA. She has been a member of DSWA since 1989. Her Levels One to Three were awarded by Lantra (one of the leading awarding bodies of nationally recognised qualifications for land-based industries in the UK).

"Membership of the Dry Stone Walling Association has been great for networking all over the world. As I child, I had read The Adventures of Tintin and been inspired to travel so after art college I went on a world trip with my sister, including taking the Trans-Siberian Express, travelling through Russia, Mongolia, China and then Hong Kong, hitchhiking around New Zealand and Australia. I was away for eighteen months but the Peak District is home and it drew me back - there is no more beautiful place. 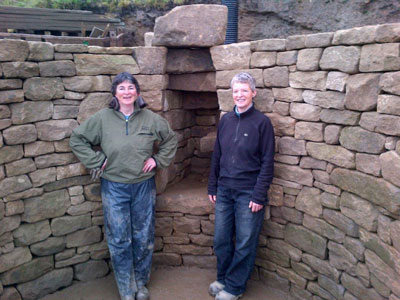 "I love the variation we get in the Peak District, whether it’s the weather or the seasons or the landscape. I feel very close to it and I wouldn't be anywhere else. Everyone looks around and sees things differently and has their own perspective on it - some people look at the land and see the work that they need to do, I love looking at the views and to see the beauty and the nature in it."

There are approximately five and a half thousand miles of dry stone wall in the Peak District National Park - their appearance changes depending on where you are with the brown gritstone in the Dark Peak and the light grey limestone of the White Peak. Walls have been used to divide land into fields for several hundred years.

"I’d love to travel back in time and see it in the past too, and find out why people built walls in certain places. There are so many layers of history in the Peak District with the local industries of quarrying, mills and agriculture - the history of walls is very interesting and so many of our visitors love to see them but there is so little written down about them. Passers-by will often stop and talk to me when they see me walling - people get passionate about walls, I think it’s to do with the craft element of how they are made, how long they last and that there are so many miles of them in varying states of repair and disrepair.

"Walls are an important feature in the landscape - people love to take photographs of them - and they are good hosts for wildlife such as little owl, small mammals like mice and stoats, insects, newts and toads. Lichen, moss and ferns grow on walls too."

Since Sally’s art student days when she began walling, the world of walling has changed. "When I started, it used to be people from rural areas, farms mainly, and predominantly men of a more mature age who were walling. Now, thanks to the work by the National Stone Centre and Derbyshire Eco Centre and the Dry Stone Walling Association, the Peak District National Park, as well as conservation volunteers, countryside rangers and others, walling is done by lots of different people. Some are interested in traditional country crafts or they want to mend or build a wall – whereas it used to be people from rural backgrounds coming on our training courses, it’s a wide cross section of people these days from industry, education and the corporate world.

"The mainstream media and popular television programmes have helped change walling’s image, people see it differently now and it is being done for different reasons from landscaping work to sculpture to garden rooms and show gardens - it is very varied. The work of Andy Goldsworthy opened people’s eyes to dry stone walls as an art form.

"Stone is a fascinating medium, we have had to rely on it all our lives whether it’s forming the buildings we live in or the roads we travel on – its use is very ingrained in us, it goes back into prehistory when we lived in caves and made tools from stone."

Sally’s sister also works with stone but emigrated to Canada nearly twenty years ago. This has led to Sally working over there including contracts in the Arctic Circle. “We worked with Inuit people there – what do you live in if there’s no snow to make your house with? They used to make Thule houses – traditional structures that are small semi-subterranean dwellings with a stone base or wall and a whalebone structure with skins, fur or turf fitted over the top. Although some nomadic traditions using tents had survived, overall the population had moved into modern houses, so the Inuit needed to regain the knowledge their ancestors had for using stone as a building material.

"I have loved learning about stone in different countries and about the different cultures and the way people live." In 1994, Sally was awarded a Churchill Fellowship Travel Scholarship and travelled to India and Norway to research the construction of dry stone buildings. She has given illustrated talks on her travels. 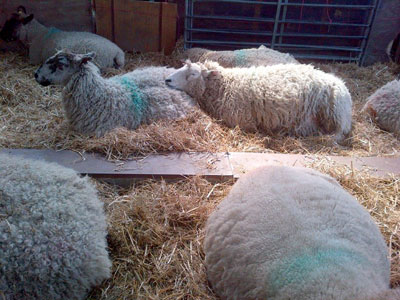 Sally is grateful that the income she achieves through walling enables her to put money back into the family beef and sheep farm to support conservation and encourage wildlife. “We have two species rich hay meadows and these have opened my eyes to the abundance of pollinators and birds they support - it’s not been an instant thing but we’ve taken advice from Natural England, the Peak Birds Project, and Peak District National Park Authority ecologists and archaeologists, and gleaned knowledge from wildlife experts to learn how to work more with nature."

As well as producing lamb, mutton and beef, Sally hosts farm education visits, which enables groups of school-age youngsters or people experiencing mental health issues to discover the benefits of getting out to the countryside and appreciate the farm’s environment. "Natural England sponsor the farm visits, which I’ve been doing for fifteen years - it’s been good to share my way of life with other people."

Sally is excited about the future too. "What I’m discovering is that there are more youngsters saying they want to farm or take up jobs in the rural economy, walling, fencing and so on. I’m meeting more and more who are determined it’s what they want to do. Over the last couple of years there has been phenomenal media coverage with programmes like Countryfile, Matt Baker on the Farm and Our Yorkshire Farm that have reached a massive audience - people love these programmes and talk about them, and now farming is very topical.

"I have got concerns as well, I’m worried that the new environmental land management schemes are good but they won’t work for every farm - it would be a tragedy to lose the small, family farms and the bloodlines of animals that go back many years. There are few professions that are so enmeshed with emotion and longevity - as farmers we are here to pass the land on to future generations, it’s about getting the balance right.

"It might sound strange to some, but I missed the start of the pandemic because we were lambing then - we came out of the lambing shed a few weeks in and wondered what was happening. You get a different perspective on life when you’re farming - you’re dealing with the seasons and what’s in front of you but we’re pretty good at rising to challenges."