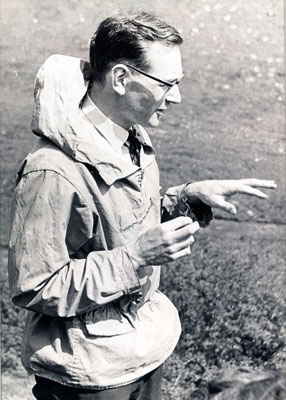 The importance of peat as a carbon store is well-documented - but much of what we now know about this precious resource in the Peak District is thanks to John Tallis.

His peat analysis work has helped to provide a huge evidence base for the development of peat after the Ice Age and for the damage that occurred to it from the industrial period onwards.

John was born in Dartford, Kent, in 1933, and was evacuated during the war years of the Second World War to Pontypridd in South Wales.

At the end of the war he moved to Wimborne Minster, Dorset (where his father was a school teacher), and then to North London.

John studied Botany at King’s College, London and graduated with a first class degree in 1954. He went on to study for a PhD at Bangor University (1954-57) and then spent 18 months at the University College of Wales, Aberystwyth, as assistant in the Botany Department.

He moved to Manchester in 1959 and was, successively, assistant lecturer, lecturer, and senior lecturer in the University, in what was known as the Department of Botany, then Department of Plant Science and, ultimately, part of the School of Biological Sciences.

During his studies at Bangor, John spent considerable time exploring the mountains of Snowdonia, as part of his research project on the ecology of the woolly hair-moss (Rhacomitrium lanuginosum). Later, at Aberystwyth, he was able to explore Borth Bog - then probably the finest example of a wet lowland peat bog in the country.

In the years following the passing of the National Parks and Access to the Countryside Act in 1949, a group of enthusiastic botanists with particular interests in the plant communities of waterlogged ground (fens and bogs) began to investigate their local areas and gradually coalesced into a larger group, the Mires Research Group. Over the next 20 years, members of the Group (known colloquially as ‘bog trotters’) scoured the country for wetland areas of particular scientific interest, which were worthy of protection as ‘Nature Reserves’ - and, in many cases, presented particular problems which merited further scientific investigation.

One such area was the moorlands of the Southern Pennines, the southern end of which is the Peak District which, in the early 1950s, had been the scene for pioneering investigations into the formation and subsequent erosion of upland peat areas by Verona Conway, a student of Professor Harry Godwin at Cambridge University (and who subsequently became Director of the Moorhouse National Nature Reserve in the Northern Pennines).

Her investigations were extended by John Tallis from 1964 onwards and provided part of the background against which the subsequent Moorland Erosion Project was set.

John continued to pursue these initial interests when he moved to Manchester and began studying the upland peat areas of the Southern Pennines. By analysing the plant remains preserved in the peat deposits - particularly the leaves of the bog moss, Sphagnum, the pollen grains of trees and other plants from the surrounding countryside, and the remains of tree stumps buried in or at the bottom of the peat - John managed to decipher and reconstruct the history of peat and vegetation development and its variation with space and time over the last 7000 or more years.

This showed not only when and how much peat formed, but also the species that were the main bog-builders as well as the history of surrounding vegetation.

John was able to document the massive changes that had taken place in the bog surfaces of the Southern Pennines in the last 200 years as well, largely as a result of air pollution from the surrounding industrial areas, increased visitor numbers to the moorlands and accidental fires. The clearly visible damage to the bog surface resulting from the massive moorland fires of 1958, 1975 and 1976, and from walkers along the Pennine Way, were wake-up calls alerting the need for further action.

As a founder member of the Mires Research Group, John also visited peatland areas throughout Britain and was able to see first-hand the sensitivity of these plant communities to human action of various kinds - not only from trampling, air pollution, and accidental fires, but also from excessive numbers of sheep grazing on the moorlands and from peat extraction.

John has published extensively on these subjects in scientific journals and in chapters in books, not only about the Peak District and wider Southern Pennines, but also in other upland peat areas. However, his 70-plus publications also include papers on mosses, lichens (he was a founder member of the British Lichen Society), the ecology of individual bog plants and moorland archaeology.

In his 1991 book, Plant Community History, John attempted to present a broader picture and, based on his experience of peatland communities, to show that the distribution and composition of a wide range of modern plant communities in many countries can be understood only in the light of their past history.

During the 1980s, John became involved in the Moorland Erosion Project set up by the (then) Peak Park Joint Planning Board and worked alongside Derek Yalden, setting up and monitoring experimental plots at three sites on the Peak District moorlands.

It was hoped that these experimental plots would yield information about appropriate treatments which could be applied on a larger scale to re-vegetate moorland areas damaged by accidental fires or peat erosion.

Indeed, the plot-scale revegetation techniques are now the foundation of the Moors for the Future restoration methods on a large scale. John and Derek co-authored three reports (with ecologist Penny Anderson's input on the third) setting out the causes of moorland erosion and possible remedies. The recommendation that re-vegetation of moorland areas could be speeded up by reducing the numbers of sheep grazing on the moors was subsequently facilitated by agri-environment subsidies.

During this period, John was also assistant editor and then chief editor of The Journal of Ecology (in which many of his scientific papers were published) for six years.

During his long period at Manchester University, John also organised numerous field trips for his botany and biology students - either daily excursions (often to the Peak District) or weekly or fortnightly field courses further afield (to Aberystwyth, Bangor, Swansea and field centres in Gloucestershire, Surrey and the Scottish Highlands). These field excursions invariably involved hill climbing, jumping over peat gullies or traversing wet peat and John was never happier than when pointing out plants and plant communities of special interest. On two occasions, at the end of a field course, John led the students (or most of them) up Snowdon to see the sun rise.

Shortly after moving to Manchester, John became involved in English folk dancing, and for more than 30 years was secretary or treasurer to a local folk dance group. He met his wife Pamela through folk-dancing, and they were married in 1963. They have three children and four grandchildren.

John and Pamela were part of a group which gave public displays at the Royal Albert Hall and in Sweden. John also danced with the Manchester Morris Men for many years, and danced competitively with them at the Llangollen International Eisteddfod.