He drew up all the National Park’s early planning policies and set up the complex governance required by legislation which involved tricky negotiations with county councils. He built relations with central government and local authorities and worked alongside Harold Abrahams (of Chariots of Fire fame) who was secretary of the government’s National Parks Commission, and Evelyn Sharp, the first female permanent secretary in the UK Civil Service.

John Foster left the Peak District National Park in 1968, to become the first director of the Countryside Commission for Scotland.

"Everything we did was new. We had the opportunity to try things that had never been done before." 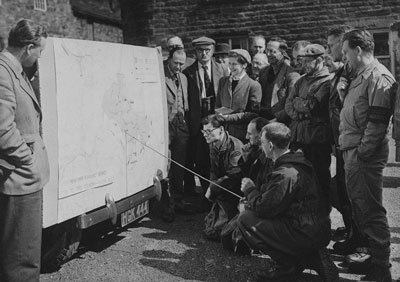 In an interview for ParkLife in 2011, John Foster described the work back in the early days of the UKs first National Park:

"In the 1950s we were national park pioneers, breaking in new legislation that had never been used before. Rural car parks, picnic sites and information booths were all new and important, as even then the Peak District was a busy place. National park visitor centres were unheard of until Fred Heardman set up a big table and filled it with information in the best room of his pub, the Nags Head, in Edale in 1954. ‘People management,’ as it was called, had never been used before in the countryside; we take it for granted now and expect certain facilities to a standard, but then it was new.

"Working with local people and businesses is an essential part of the role of national parks. It’s about getting into the hearts and minds of people, helping them develop in an appropriate scale and character that is better for their living standards and way of life but good for the place too. It’s important not to lose the national perspective as well as paying attention to local needs. The balance of the two: national interest and local need, is vital to a sustainable future for all national parks."

John gained inspiration for providing information to the public about the Peak District National Park while visiting American national parks.

He said: "In the USA I realised that interpretation was the way forward – telling people the story of the place. I appointed Don Aldridge as the first ever Information Officer. He won a Churchill Fellowship grant that enabled him to go to America and learn from their established national park system. He translated this experience into the British national park context and so the Peak District was the first British national park to help people understand and enjoy the place – it’s become the way things are done, no-one ever thinks ‘who did that first?’!"

Another first for the Peak District was the introduction of wardens.

John said: "One of my proudest moments was Easter Monday in 1954 when Tom Tomlinson was inaugurated as the first and only paid warden. It was his job, which he did very well, to work with and organise the many volunteer wardens who came out every weekend to help people enjoy the Peak District safely."

The warden service evolved over the years to become the Ranger Service we know today.

During the 1960's with Beeching's reform of train services the Manchester to Sheffield line through the Hope Valley was threatened with closure and the national park fought and won the public enquiry to keep it open.

John said: "I was very pleased to win the public enquiry to keep the railway line through the Hope Valley. We were in the business of providing for people and the means to travel and gain access to places is part of that."

Today the Hope Valley line is still an important transport link for residents and visitors.

Looking back over sixty years, John was proud of the way British national parks developed.

He said: "All the national parks have made progress from those early days. It has been very important that all have had planning control, the control of development, in their hands. In the early days we were under-financed by central government but we made the best of it as I’m sure they are still doing.

"The Peak District National Park has lasted well and developed positively over the sixty years [the interview took place in 2011] and I hope it will go on developing in a positive, national park way in the future. It is a very special place.

"National parks have turned out to have been well worthwhile establishing and managing over the years for protecting the environment, supporting local communities and helping millions of visitors enjoy them every year."

John can be heard on the Campaign for National Parks video...