John Thompson spent his whole professional life, from 1966 to 2007, working for the National Park, and after retiring devoted another 15 years to the Local Access Forum, including four years as Chair. In total, John had 55 years' involvement with and extensive knowledge of Derbyshire and Peak District countryside issues.

John began working for the National Park Authority from leaving school, starting in 1966 as a trainee whilst studying for a Diploma in Town Planning. He gained successive promotions over the years, including in 2003, standing in as the interim National Park Officer (now the Chief Executive role). When he retired in May 2007, he was Director of Recreation and Education. 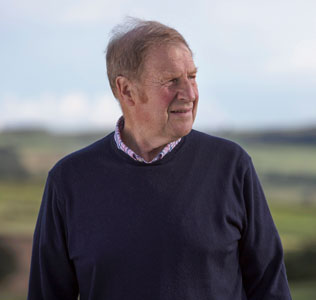 During his career, John developed close and effective partnerships including the Upper Derwent Valley, Macclesfield Forest and Wildboarclough, Longdendale and the Trans Pennine Trail, Upper Don and Moors for the Future, and worked with national and regional sports and recreation panels, three water companies, the National Trust, other land owning and management interests, constituent authorities and parish councils. John pushed forward many new initiatives and partnerships in his career, including getting more urban youngsters and diverse groups involved in the National Park, and steering the Moors for the Future restoration partnership.

Working in roles from planning control and policy through National Park Management Plans and Projects, to being Director of Recreation and Education, John took huge pride in the work he was responsible for and especially in his colleagues: the Ranger service, access and rights of way initiatives, the National Park Study Centre at Losehill Hall, sustainable tourism, visitor and cycle hire centres, area management initiatives, information, media and design services.

He was an important advocate for the National Park Authority for greater access to open country for all, leading to the Countryside and Rights of Way Act 2000, which saw the Peak District benefit with a doubling in access land in 2004, from 249 to 524 square kilometres, covering 37% of the National Park; establishing the first Local Access Forum in the country; and great efforts through the Ranger service to ensure close liaison with landowners, farmers, user groups and conservation bodies to get well signed, accessible and publicised arrangements for the enjoyment of all. Improvements continue to be made today through the work of the Local Access Forum and the access and rights of way team.

In retirement, John continued to be involved in access and rights of way developments and improvements as a volunteer and became Chair of the Local Access Forum.

During an Interview in 2021 for an article in ParkLife magazine (about the twentieth anniversary of the Local Access Forum), John said: “I feel a real sense of joy to have been involved with the inspirational work of the Peak District National Park since 1966, spanning my 41 year career, and in my voluntary position as Chair of the Local Access Forum.

“I have been involved in many different roles from planning, landscape and projects through to recreation and education. Delivering action on the ground through partnerships for people and the environment was a great achievement and the result of shared action with highly professional, enthusiastic and dedicated people caring for and creating opportunities for greater understanding and enjoyment of a very special place.”

In the article, John said: “Without the Local Access Forum there would be little opportunity for people who are enjoying the National Park to engage with the people who are managing it – whether they be the authorities or landowners. It provides an opportunity that enables a better understanding on all sides of why things are managed as they are.

“The Local Access Forum has a crucial role in giving independent advice to the National Park Authority and county councils on improvements to public access for people’s open air recreation and enjoyment.

“Our approach is one of consensus and understanding, which helps us address issues of conflict and advise on ways to resolve these, whether it’s access issues such as motor vehicle recreation, mountain-biking or water-borne recreation, or land management concerns such as wildfire risk or control of dogs.”

Beyond his work for the National Park, John also served on the National Forest Company Board for six years (1994 to 2000), involved in the pioneering national initiative to establish a Forest in 200 square miles in the Heart of England. He was keen to assist increased access and recreation opportunities and was Vice Chair for 2 years of this exemplar project.

John contributed to a Regional Countryside Strategy for the East Midlands with the emphasis on practical joined up action like the Mid Shire Way from the Ridgeway, near Oxford, to Lyme Park through Derbyshire and the Peak District.

He was also active in his local community, and was chair of the Anthony Gell School Foundation Trust for over 20 years until June 2018, supporting development of improved sports facilities and other opportunities for the school and community. He was also a trustee (former chair) of the Wirksworth Recreation Ground Trust, providing opportunities for local sports. He was a keen cricketer, and we reliably informed that his three decades of batting, bowling and fielding statistics are ‘5,799 runs at an average of 16.05 + 6,693.1 overs at average of 12.9 + 200 catches’.

Editors Note: Sadly, John passed away in January 2022, and many people from the National Park Authority and partner organisations paid tribute to his kind character, considerate nature, diligence and exemplary dedication to National Park principles. Many commented on his exceptional ability to bring people and organisations together to succeed in achieving the best for the National Park, for advocating access and people’s enjoyment, for his unfailing courtesy, diplomacy and absolute integrity. A real inspiration.