Harry Brunt served as deputy officer (equivalent to deputy manager today) of the National Park from its formation in 1951 until his death in 1980.

Widely respected throughout the organisation, Harry's name lives on in Brunt's Barn - the National Park volunteers centre at Upper Padley, which was re-named after him in 1981.

Harry’s role was wide-ranging and included the development of ranger and warden services. A keen conservationist, he was also involved in developing access agreements, the restoration of former railway lines into trails (beginning with the Tissington Trail) and the creation of National Park information centres.

In his obituary report, National Park officer Theo Burrell wrote that Harry "combined experience with imagination, drive with good sense, determination with modesty." He was "a man of ideas, but a practical man."

Theo added: "Everyone inside and outside the office would 'have a word with Harry'. For Harry would either know the answer already or would produce a new, quick and sound one without fuss or bother.

Harry was also renowned for his people skills. His granddaughter Fran Reed says: "Harry was able to see and appreciate the views of farmers, landowners, visitors and communities on all aspects when it came to making decisions and he was known for his realistic approach to policy making.

"Harry was able to see and appreciate the views of farmers, landowners, visitors and communities on all aspects when it came to making decisions and he was known for his realistic approach to policy making." 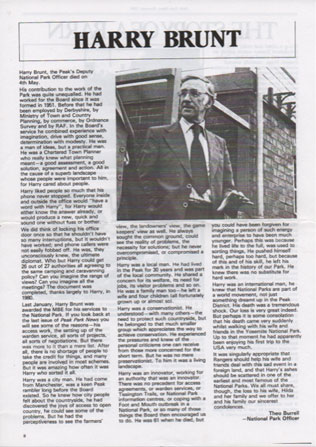 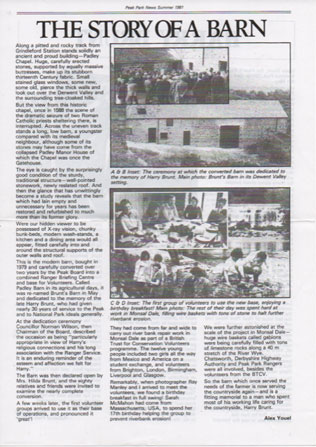 "In 1980 he managed to get 26 out of 27 authorities to agree on the same camping and caravanning policy - quite an achievement, which was due to his diplomatic and people-focused approach."

Harry's services to the National Park were recognised in January 1980, when he was awarded the MBE. Accompanied by his wife Hilda, family and friends, he received his honour from the Queen in April.

Soon after, Harry joined Hilda and some friends on a holiday to Yosemite National Park in California. On 1 May, he tragically suffered a heart attack and passed away, aged 61.

Harry grew up in Manchester and first experienced the Peak District as a teenage hiker. Fran explains: "He was one of four boys who could often be found playing on the cobbled streets of back to back houses. He lived across the road from his best friend, Les, who became an integral part of his life and a lifelong friend to the family.

"Harry’s passion for the countryside began as a teenager, when he’d get the train from Manchester into Derbyshire for long hikes, fresh air and to admire the beauty of the countryside.

"Before joining the National Park, Harry worked for Ordnance Survey and then served in the RAF as a draughtsman during the Second World War, spending large amounts of time in Egypt.

"He moved to the Peak District after the war with Hilda, where he designed and built his own house in Bakewell which was to become the family home to their four children. One of his daughters, Barbara, remembers that when he wasn’t working, Harry would suggest a nice long walk in the Peak District, often visiting the newest areas to be developed. He was a family man, who also enjoyed taking the children on camping holidays.

"He loved holidays in national parks - both in the UK and abroad. His family took comfort from the fact that Harry was in a place he loved when he died and his ashes were scattered in Yosemite."