Yvonne Witter – a Peak District champion in so many ways

Yvonne Witter's love of the Peak District knows no bounds.

From inspiring people to explore the National Park’s stunning landscapes through Peak District Mosaic, to championing its qualities via local and national media to helping look after its future as an Authority member, Yvonne speaks from the heart.

She says: "I had visited the Peak District before, but I really fell in love with it in August 2008, when I learned how to explore with an Ordnance Survey map through a two-day course organised by the Campaign for National Parks (CNP) Mosaic project.

"Later that year, I organised my first ‘Conquerors’ group walk, celebrating my birthday on the same route in the Hope Valley. From that moment on, I have committed myself to introducing others to the Peak District National Park."

Along the way, Yvonne has overcome some personal challenges, as she recalls: "In July 2010, I led my first group walk to Mam Tor. Reaching the summit of Mam Tor for the first time was a special moment in my life because I had been scared of going up hills. But I conquered my fear!

"Not only was my journey to the Bronze Age hill fort a test of my strength and courage, it also reconnected me to the sort oflandscape I loved as a child growing up in Jamaica." 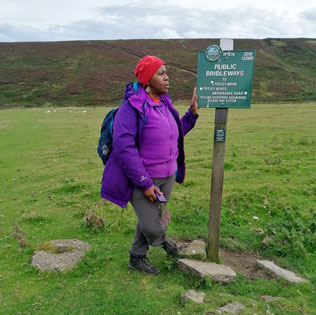 "Many people do not think the outdoors is for them, but I want to encourage everyone."

Yvonne joined the CNP’s Mosaic project in 2008, going on to become a Peak District National Park Mosaic champion in 2012. Relishing the opportunity to encourage people from black and ethnic minority communities to experience and enjoy the outdoors, she has been chair of Peak District Mosaic since 2014.

She was a trustee of Friends of the Peak District for nine years and, since January 2019, Yvonne has been a GetOutside Champion for Ordnance Survey.

In July 2019, Yvonne was appointed by the Department for Environment, Food and Rural Affairs (DEFRA) as a Member the Peak District National Park Authority.

Her tireless enthusiasm for the outdoors has earned recognition on many levels. In 2013, she featured in the National Trust’s Octavia Hill Awards as runner up in the Inspirational Hero category, celebrating people who inspire and nurture the next generation of countryside enthusiasts.

And, in November 2020, Yvonne was named in the BBC Radio 4 Woman's Hour Power List.

Born in Burton-on-Trent, Yvonne moved to Jamaica at the age of four with her family.

She returned to the UK 22 years later and, since 1990, she has lived in Sheffield where she works as a senior health and wellbeing worker with a local health organisation.

Yvonne says: "Being a volunteer Mosaic Community Champion and also a trustee of Friends of the Peak District has helped me to open up a whole new world to people with visits to beautiful places.

"I’m a self-motivator and a natural leader and I share my love of the outdoors with other people, to help make a difference to their lives.

"I love being outdoors and enjoy walking in the countryside. I also enjoy running - for both leisure and competitively - and I cycle in both urban areas and in the Peak District National Park."

In July 2015, she pushed her fitness to new limits by tackling the Hathersage Hilly Triathlon in some of the Hope Valley’s most punishing terrain.

Her dedication is infectious and Yvonne has been instrumental in developing the recent Peak Wise training programme to recruit new community champions for Peak District Mosaic, in partnership with Peak District National Park Authority staff.

"I will continue my adventures, engage even more with communities and create events to get them enjoying the great outdoors!"

Despite her busy schedule, Yvonne still makes time for another great love... poetry, which she writes and performs in both Jamaican dialect and English. Some of her poems reflect her passion for the Peak District such as this one, inspired by Stanage Edge.

I have conquered some hills and valleys

And I often welcome others to commune with the land

Many times walking and talking like people in a band

My feet bear witness to footpaths and bridleways

The voice of my spirit echoes like a drum

And there is a lot for me to overcome

I trotted across fields as questioning eyes affixed on me

This journey bears no similarity to a foreign holiday

Along the route my feet were like a musical keyboard

As I strolled through the crispy brown, orange and chocolate leaves,

I stopped and gazed at the magnificent haven

Sharing with people who came from far away and near

I captured and stored the green square carpet landscape

as reference in my photographic memory

that I would later frame for my home gallery

A moment of silence glancing at the beautiful butterfly

With my arms outstretched reaching for the sky

To celebrate my pilgrimage

On the Edge at Stanage Edge.